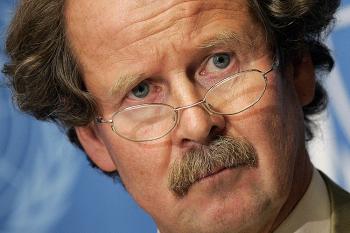 Charlotte Cuthbertson
Senior Reporter
Charlotte Cuthbertson is a senior reporter with The Epoch Times who primarily covers border security and the opioid crisis.
View profile
Follow
biggersmaller
Print
No straight answers have been produced by the Chinese regime over the allegations of state-sanctioned organ harvesting of Falun Gong practitioners, says Manfred Nowak, the United Nations Special Rapporteur on Torture.

“The Chinese government has yet to come clean and be transparent,” said Nowak in an interview with The Epoch Times. “It remains to be seen how it could be possible that organ transplant surgeries in Chinese hospitals have risen massively since 1999, while there are never that many voluntary donors available.”

The Chinese Communist Party has denied the allegations for three years despite several compelling investigative reports and several probes by the United Nations. Falun Gong is a spiritual practice based on truth, compassion, tolerance, and includes five sets of meditative exercises. In July 1999, the communist regime in China began persecuting people who practice it.

International human rights lawyer David Matas, and former crown prosecutor and member of parliament, David Kilgour, published their first report in July 2006, following up with a second in January 2007.

Their report, “Bloody Harvest: Revised Report Into Allegations of Organ Harvesting of Falun Gong Practitioners in China,” concludes: "We believe that there has been and continues today to be large-scale organ seizures from unwilling Falun Gong practitioners … The very horror made us reel back in disbelief.”

Major findings include 41,500 organs in transplants unaccounted for between 2001 and 2005. Transplants increased in parallel with the persecution of Falun Gong. In 2001 the amount of liver transplants in China numbered seven. By 2005 it had reached 2,168 for one hospital. The Chinese military is heavily involved in the transplant system in China, and the regime has admitted that the vast majority of organs for transplant come from executed prisoners.

“The explanation that most of these organs come from death row inmates is inconclusive,” said Nowak. “If so, the number of executed felons must then be much higher as so far assumed. I have asked the Chinese government to provide clarity and asked for precise data.”

The accusations remain, said Nowak. “They were denied, but the Chinese government has not invalidated them, but on the other hand they haven´t been proven either. This makes for a difficult dilemma—one that only be resolved if China is willing to cooperate. And that is what is lacking.”

Nowak has submitted two reports to the U.N. Human Rights Council formally requesting the Chinese regime respond to the allegations. The report states, in part, that, “The [Falun Gong] practitioners were given injections to induce heart failure, and therefore were killed in the course of the organ harvesting operations or immediately thereafter.”

“Nothing seems to have changed for the better,” said Nowak. “We lack exact statistics. I cannot say if the situation has changed since I left China. But I have no reason to assume anything has turned for the better, because I have not had any such hints. The majority of the inmates in these [forced labor] camps were Falun Gong members. And that is so frightening, because none of these people were ever given the benefit of a trial. They were never charged.”

The Kilgour-Matas report includes evidence from a hospital Web site (now removed), that claims, from “January 2005 to now, we have done 647 liver transplants—12 of them done this week. The average waiting time is two weeks."

A chart also removed about the same time indicates that in 1998 the hospital completed only nine liver transplants—by 2005 it had completed fully 2248.

In a 2005 trip to China that took Nowak 10 years of requests to the regime, he discovered that two-thirds of the torture cases reported in labor camps were Falun Gong practitioners.

Falun Gong practitioners are put into forced labor camps, said Nowak. “In the same way the officials deal with prostitutes or with those that exhibit 'other socially damaging behavior.' One can say that a relatively big part of the inmates in these camps are Falun Gong persons. It definitely is one of the largest groups.”

Nowak said the number of practitioners in China is huge. “In spite of the persecution [it] has not diminished, but increased,” he said.

Florian Godovits contributed to this article.