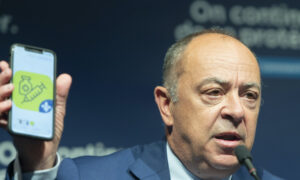 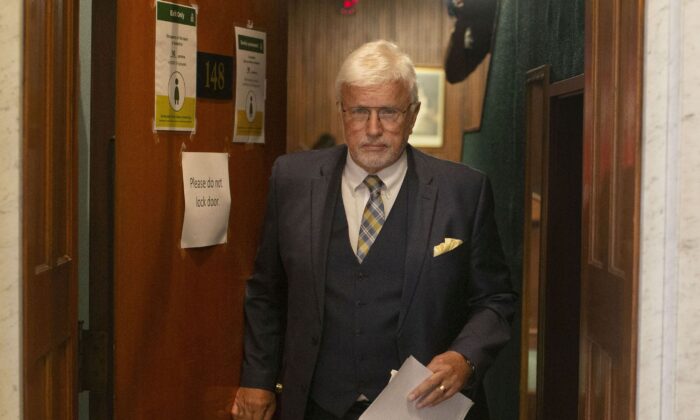 Ontario PC MPP Rick Nicholls leaves a news conference at the Queens Park Legislature in Toronto on Aug. 19, 2021, after announcing he would not get vaccinated against COVID-19. Nicholls was kicked out of the caucus the same day. (The Canadian Press/Chris Young)
Viewpoints

Issues such as health care, education, and foreign policy typically dominate the discourse at the beginning of a federal election campaign. We are not in a typical campaign, however. As we near the two-year mark of the COVID-19 pandemic, it isn’t surprising yet still remains odd that an issue such as mandatory vaccinations would be at the top of the agenda. Parties, pundits, and activists are all working to set traps and score points with this singular and divisive issue.

While we haven’t drifted into the realm of truly forced medical procedures yet, we are moving in that direction. Legislation is being proposed and drafted that coerces people through restrictions on employment eligibility and travel. Private enterprise is encouraged to take part as we see sporting events demanding proof of vaccination while theatres and restaurants mull imposing similar requirements on their patrons and staff.

While the concept of vaccine passports was dismissed as being in the realm of conspiracy theories less than a year ago, it is now being accepted as a part of life.

Polling of the Canadian public indicates that the majority of citizens support the concept of mandatory vaccination. A recent survey of 1,500 Canadians conducted by Ipsos found that well over three-quarters of Canadians supported mandatory vaccines for teachers and health-care workers. That number climbed as high as 90 percent in the Atlantic provinces. Political leaders in every major party are now compelled to make their stances clear on mandatory vaccination.

Prime Minister Justin Trudeau has taken the strongest stance on the issue, proposing mandatory vaccination for all public employees and all employees in federally regulated fields. That encompasses well over one million Canadians, from bureaucrats in the civil service to broadcasters. Trudeau ominously said that there will be “consequences” for federal workers who refuse vaccination. He also wants mandatory vaccinations to be imposed on travellers by sea or air whether foreign or domestic, and has made vaccination a requirement for all Liberal candidates in the election.

Conservative Leader Erin O’Toole has taken a more moderate stance. While he is supportive of vaccines, he has allowed an out through mandatory daily rapid tests. This will still require some sort of vaccine passport and still puts some heavy pressure on people who are not vaccinated. Although the costs of such widespread testing will be high, it does give an avenue for a person who refuses vaccination to remain employed and be able to travel.

NDP Leader Jagmeet Singh’s stance is similar to Trudeau’s in that he feels vaccines should be compelled through workplace restrictions. Singh has been careful to keep his approach nuanced in order to avoid clashes with public service unions. His base is strongly in favour of mandatory vaccinations, but if thousands of unionized civil servants suddenly find themselves fired, organized labour may push back.

People’s Party Leader Maxime Bernier has been openly opposed to mandatory vaccination while Green Party Leader Annamie Paul has not taken a clear stance on the issue. Both parties could garner some dedicated support from people strongly opposed to vaccination in general, but it won’t put them onside with the majority.

Pressure is mounting on all parties to have their candidates declare whether they are vaccinated. Prominent media members have been calling out candidates on social media one by one and demanding answers. Apparently, medical privacy is no longer something to be respected.

On the provincial front, the pressures are rising as well. Ontario Premier Doug Ford just ejected MPP Rick Nicholls from the Progressive Conservative caucus for his refusal to get vaccinated. Other premiers are feeling pressure to take similar actions regarding their caucus members.

Speaking for myself, I have chosen to get both doses of the COVID-19 vaccine. The important element here, though, is choice. We are moving into a realm where the tyranny of the majority is pressuring people into forced medications, and we should be concerned about this. People who have chosen not to be vaccinated for whatever reason are fast becoming societal pariahs, unemployable, and unable to travel. We should be trying to encourage people to get vaccinated through reason rather than compulsion. Assuming that the COVID vaccines are as effective as they have been branded to be, we shouldn’t need 100 percent of the population to be vaccinated before reaching herd immunity anyway.

Over time, I suspect that many mandates and vaccination requirements will be repealed as court challenges mount and the pandemic fades. Nevertheless, we are setting some disturbing precedents in this election campaign as leaders feel obliged to step on the rights of the individual to try to win the support of the majority.

We can’t afford to dismiss concerns about individual rights as conspiracy theories any longer. But how far will we let the state go before we speak up?