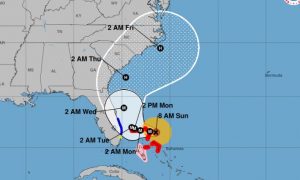 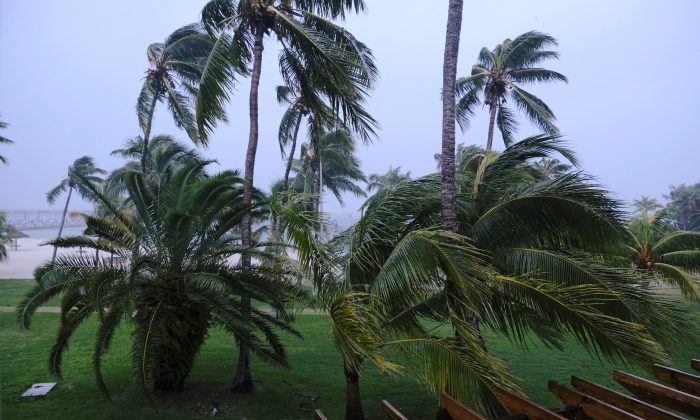 Palm trees blow in the wind during the arrival of Hurricane Dorian in Marsh Harbour, the Great Abaco Island, Bahamas, on Sept. 1, 2019. (Dante Carrer/Reuters)
US News

Mandatory evacuations were issued for the entirety of South Carolina’s coast as Hurricane Dorian churns away more than 100 miles east of the U.S. mainland.

He is also planning on shutting down schools in the affected areas.

“This is a very serious hurricane,” McMaster said.

The NHC, in an update at 7 p.m. on Sunday, said that the storm is currently hammering the Abacos Islands in the Bahamas with 185 mph sustained winds. Then, the storm is going to get precariously near the southeastern coast of the United States.

Dorian, with its 185-mph winds, tied a historical record as the strongest hurricane to make landfall in the Atlantic basin. It tied the 1935 Labor Day Hurricane.

The Florida Emergency Management website posted an alert, saying that residents in some areas along the east coast should evacuate.

The following counties are under evacuations:

Martin County – Mandatory evacuation order for Zone A and Zone B are in effect. This includes Hutchinson Island, Jupiter Island, Sewall’s Point, low lying areas, and mobile and manufactured homes.

Palm Beach County – Mandatory evacuation order for Zone A and Zone B. Zone A includes mobile homes, sub-standard housing and low-lying areas prone to water intrusion. Zone B includes the barrier islands, land areas north and south of the Jupiter Inlet, and other surge-vulnerable areas south along the Intracoastal Waterway to the Broward County line.

Brevard County – Mandatory evacuation order is being issued at 5 p.m. today for Zone A, including all mobile and manufactured homes.

St. Johns County – Mandatory evacuation order is being issued at 8 a.m. on Monday, September 2 for Zone A and Zone B, which includes the entire cities of St. Augustine and St. Augustine Beach, and those living on waterfront property or in flood-prone areas.

Voluntary and phased evacuations have been issued in: