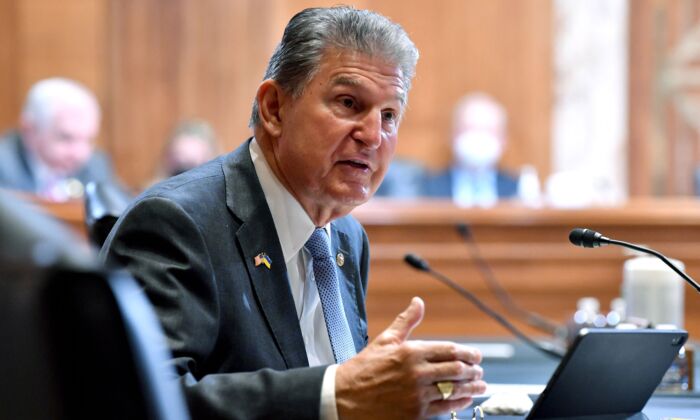 As Democrats scramble to pass a trimmed-down version of the Build Back Better (BBB) social spending package before the end of summer and the start of an intense campaign season, Sen. Joe Manchin’s (D-W.Va.) concerns about the package remain “unresolved.”

The push to pass BBB began during the summer of 2021. Using the budget reconciliation process, the legislation would be able to bypass the 60-vote filibuster threshold in the Senate and be approved by a simple majority.

However, because Democrats hold the barest possible majority in the Senate—50 seats plus a one-vote advantage due to Vice President Kamala Harris’s tie-breaking vote—and because Republicans unilaterally oppose BBB, every Democrat in the upper chamber must be on board with any reconciliation proposal that hopes to pass.

In December, after months of scrambled negotiations with Manchin and Sen. Kyrsten Sinema (D-Ariz.), Manchin dashed Democrats’ hopes when he said he wouldn’t vote for the package amid continued concerns about inflation.

Since then, some Democrats have made efforts behind the scenes to push for a revival of the package. Although Manchin has been loosely involved in these negotiations, they’ve only recently gained traction, winning the support of Senate Majority Leader Chuck Schumer (D-N.Y.), who’s now making a desperate push to reach a scaled-down agreement on BBB before the end of summer.

But any such package is far from close to being ready, according to Manchin spokesperson Sam Runyon.

“Suggestions that a reconciliation deal is close are false. Sen. Manchin still has serious unresolved concerns, and there is a lot of work to be done before it’s conceivable that a deal can be reached he can sign onto,” Runyon said.

A particular focus of Democrats with the package has been on climate policy.

Many Democrats have pushed for tax credits for clean energy manufacturing, taxing methane emissions, and a new tax on carbon-intensive imports such as steel.

The first of the three climate policies appears to have Manchin’s support.

In one piece of legislation he sponsored with Sen. Debbie Stabenow (D-Mich.), the duo called for providing incentives to manufacture clean energy, with a focus on rural communities.

Senate Environment and Public Works Committee Chairman Tom Carper (D-Del.) has also worked with Manchin on a proposal to tax methane emissions, another good sign for Democrats rallying behind the policy.

Finally, the proposal to tax carbon-intensive imports, led by Sen. Sheldon Whitehouse (D-R.I.) has garnered some praise from Manchin, who, in a recent appropriations committee hearing, praised the proposal as a way to increase U.S. manufacturers’ competitiveness with China.

To pay for these policies, Democrats have pushed for a repeal of several provisions of the 2017 Tax Cuts and Jobs Act—a proposal that the moderate Sinema isn’t enthusiastic about.

During the last round of BBB negotiations, several sources reported that Sinema—who generally declines to comment on her policy positions during negotiations—was opposed to re-hiking the corporate and income tax rates from their post-2017 levels.

It isn’t clear if Sinema maintains her opposition on this front, but if she does, it could put a kink in Democrats’ aspirations to fund the measure.

The House and Senate have each passed their own versions of the legislation, and bicameral committees are currently working to hammer out the differences between the versions passed by each chamber.

The White House and Senate alike are anxious to see the competitiveness legislation passed, further heightening the challenges that Democrats could face in moving ahead with a scaled-back BBB.