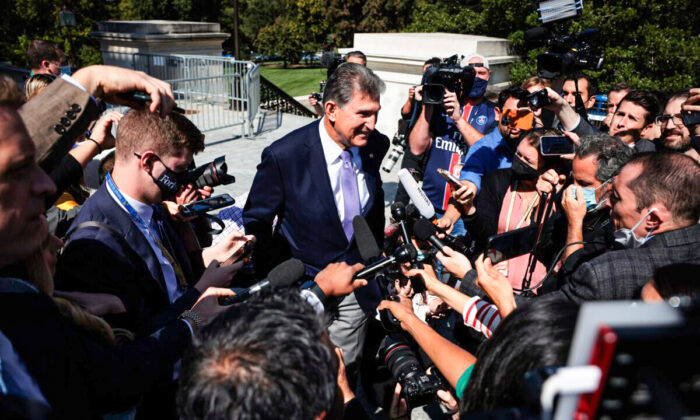 Manchin Opposes Raskin’s Fed Nomination Over Her Stance on Energy

Toomey: "Republican members of the Banking Committee are willing to vote on the other four Fed nominees"
By Nathan Worcester

Sen. Joe Manchin (D-W.Va.) has declared he won’t vote for Sarah Bloom Raskin to be the vice chair for supervision at the Federal Reserve, potentially dooming the confirmation efforts of President Joe Biden and other Senate Democrats.

“Now more than ever, the United States must have policy leaders and economic experts who are focused on the most pressing issues facing the American people and our nation—specifically rising inflation, and energy costs,” Manchin said in a statement announcing his decision.

“I have come to the conclusion that I am unable to support her nomination to serve as a member of the Federal Reserve Board,” he said. “The Federal Reserve Board must remain hyper-focused on ending the inflation taxes hurting working families and getting more workers off the sidelines and back into the economy.

“The time has come for the Federal Reserve Board to return to its defining principles and dual mandate of controlling inflation by ensuring stable prices and maximum employment. I will not support any future nominee that does not respect these critical priorities.”

While Manchin doesn’t serve on the banking committee, his opposition suggests that Raskin’s nomination could be doomed if put to a vote on the Senate floor.

Raskin is married to Rep. Jamie Raskin (D-Md.), who led the second impeachment trial of then-President Donald Trump in the House of Representatives.

During Barack Obama’s presidency, Raskin served as a member of the Federal Reserve Board of Governors before later serving as a deputy secretary of the U.S. Treasury. She is currently a professor at Duke University Law School, where her work is said to include “the adaptation of financial regulatory tools, as they pertain to climate risk.”

The description of one recent class taught by Raskin, “Climate Change and Financial Markets,” calls financial markets “one of the most important arenas in the struggle to meet the great challenges posed by climate change.”

In its “Glossary of Terms,” the Encyclopedia of Marxism defines “arena of struggle” as “an alternative conception of institutions and social formations. … From this standpoint, it is clear why abstention from participation in state institutions may be wrong, since it entails abstention from an arena of struggle; the bourgeoisie does not have the capacity to wield parliament, the army etc., self-consciously, for its own ends, without encountering contradictions and resistance; communists should participate for their own ends.”

Raskin’s nomination has been under consideration by the Senate Committee on Banking, Housing, and Urban Affairs. In February, Republicans on that committee stalled her nomination by not showing up for a vote on Raskin and four other nominees to the Fed.

Earlier that month, Republicans on the panel released a report that highlighted some of her past statements on climate change and finance.

For example, in a 2020 Ceres report, Raskin stated that climate change will “flatten an economy and grind it to dust.” In that same report, she said financial regulators should work to “allocate capital” away from fossil fuels.

In a Project Syndicate article, Raskin referred to “access to credit” as one lever for financial regulators seeking to “support a rapid and just green transition.”

Sen. Pat Toomey (R-Pa.), ranking Republican on the banking committee, signaled his support for Manchin, while adding that Republicans on the committee were prepared to consider the other individuals nominated to the Fed by Biden.

“As Senator Manchin suggested today, Ms. Raskin’s past advocacy for having the Federal Reserve allocate capital and discriminate against traditional energy companies would not only politicize the Fed, but weaken economic growth at a crucial moment in history,” Toomey said.

“With inflation at a 40-year high, gas prices skyrocketing, and Russia waging an energy-funded war, the last thing the American people need are unelected bureaucrats advancing policies that will cause energy costs to rise.

“As we’ve repeatedly said, Republican members of the Banking Committee are willing to vote on the other four Fed nominees. I hope Chairman Brown will immediately move forward with scheduling a vote for this week.”

“As with Build Back Better, I am pleased to see Sen. Manchin again putting America ahead of party in voicing opposition to Biden Fed nominee Sarah Bloom Raskin, who advocated for the Fed to involve itself in advancing the leftist climate agenda,” said Steve Milloy, proprietor of the website JunkScience.com, in a message to The Epoch Times.

“Despite having already been in an energy crisis before the Ukraine invasion, Raskin would have pressed the Fed to penalize banks for lending to the fossil fuels industry because of climate, an area in which the Fed has no expertise.”

Occupy Democrats wrote that Manchin “stab[bed] Joe Biden in the back again.”

“Sarah Bloom Raskin is beyond qualified, the right person at the right time, and today’s news is just another example of the power the Chamber of Commerce and the fossil fuel industry has over our politics,” wrote Jamal Raad, co-founder of Evergreen Action, a climate activist group.

Sen. Sherrod Brown (D-Ohio), chair of the banking committee, didn’t respond by press time to a request by The Epoch Times for comment on Manchin’s announcement.