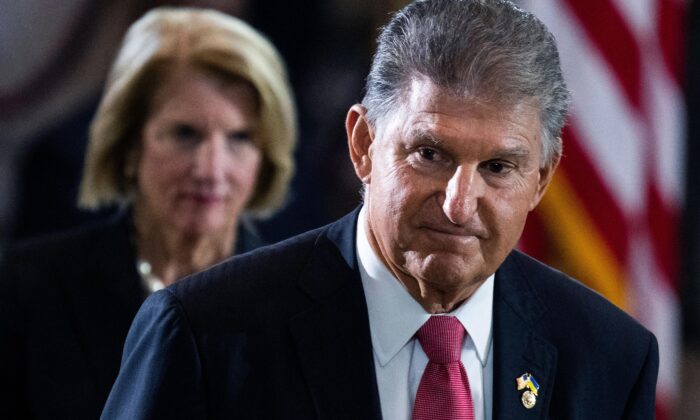 During a Sept. 20 press conference, Sen. Joe Manchin (D-W. Va.) blasted Republicans for refusing to side with him on fossil fuel permitting reform as part of the upcoming government funding bill.

Following the passage of the $700 billion Inflation Reduction Act, which was largely negotiated between Manchin and Senate Majority Leader Chuck Schumer (D-N.Y.) behind closed doors, it was revealed that as part of the deal Schumer agreed to get Manchin the votes for fossil fuel permitting reforms.

Currently, permitting new fossil fuel ventures is a years-long process. Manchin has called for reforming this process now as U.S. consumers continue to face high gas prices and as Europe braces for a veritable energy crisis this winter.

On the surface, the possibility of passing permitting reforms would seem to be in the interest of Republican senators, who have long pushed for just such reforms. However, the minority party has suggested that they will not support any such measure as part of a must-pass continuing resolution, saying that they refuse to give their support to a scheme devised in a backroom deal between the two top Democrats.

In one such comment, Sen. Lindsey Graham (R-S.C.) said that any such bill would be “part of a political payback scheme,” and vowed not to support the move. This attitude seems to be shared by many of Graham’s GOP colleagues.

Also threatening Manchin’s hopes for permitting reform is the opposition of Sen. Bernie Sanders (I-Vt.), whose opposition to fossil fuels has propelled him to oppose the measure proposed by Manchin.

With both Republicans and Sanders rallied against him, it could be difficult for Manchin to push his demanded reforms through if leadership hopes to avoid a government shutdown.

At a Sept. 20 press conference, Manchin took an uncharacteristically aggressive tone in decrying the unlikely alliance between Republicans and the Senate’s most left-wing member.

Manchin opened the conference with the comment, “the old saying [is] that politics makes strange bedfellows.”

“I gotta be honest with you, I’ve been around for a long time, and state politics and federal politics,” Manchin continued. “I’ve never seen stranger bedfellows than Bernie Sanders and the the extreme liberal left, siding up with Republican leadership. In the caucus, I’ve never seen this happen.”

The alliance, Manchin opined, is little more than “revenge politics”—specifically revenge against himself, Manchin, for having supported the Inflation Reduction Act after having killed the much more expensive Build Back Better Act.

For Sanders, Manchin acknowledged, “this is not about me. This is about something that Bernie has never—Bernie has never supported anything about permitting reforms.”

Instead, Manchin directed much of the thrust of his comments against Republicans, who have supported Manchin’s proposal until now.

Though the issue has long laid dormant, Manchin argued that now is the time for Congress to take it up for real in view of ongoing energy price spikes in the United States and the unfolding energy crisis in Europe that has been exacerbated by oil-rich Russia’s invasion of Ukraine.

Speaking on GOP opposition, Manchin said, “I’m hearing that the Republican leadership is upset and they’re saying we’re not going to get the victory to Joe Manchin.”

“Joe Manchin is not looking for a victory,” Manchin insisted. “We’ve got a good piece of legislation that is extremely balanced. And I think it’ll prove itself in time. The bottom line is how much suffering and how much pain do you want to inflict on American people for the time, I can assure you basically, the longer the time goes, the more the price goes up.”

U.S. energy, Manchin noted in a common refrain for the West Virginia Democrat, is cleaner than energy anywhere else in the world. Seen in conjunction with the unfurling global energy crisis, Manchin argued that it makes no sense for Congress not to take action on the issue now.

In addition, Manchin argued that his proposed reforms would help reduce inflation by upping U.S. fossil fuel production, a metric which many economists have argued is one of the most efficient ways to get out of inflationary periods.

“This type of politics is something I can’t accept,” Manchin said, wrapping up his comments. “This is a type of politics that makes me sick and makes the American public sick. If we make the American people pay for something that we can avert and change permitting so that we can cut costs down and put more product in the market and reduce your prices. Put more product in the market where there’s going to be gasoline at the pump? Or is it going to be at your home and you’re paying utility bills, and helping our allies who have one hell of a war for survival?

“If we can’t rise to that occasion, God help us all.”

Manchin suggested during the conference that he would be willing to let the government shut down over the issue if necessary, but insisted that this would not be his fault as he would choose to vote for the bill.

Asked about whether Schumer remains committed to the deal, Manchin reported that he does, and also said that the White House has been on board with the proposal.

To force passage of his demands, Manchin has insisted that they be passed as part of a stop-gap spending package.

If the package is not passed by Sept. 30, the government will go into a shutdown—an eventuality that Manchin has said he is comfortable with if his demands are not met.

Meanwhile, some Democrats opposed to the fossil fuel concessions have doubled down on their position.

In a letter circulated to other House Democrats, House Natural Resources Chairman Raul Grijalva (D-Ariz.) demanded that Manchin’s requested fossil fuel policies not be included as part of the continuing resolution (CR).

“Don’t attach it to a budget, to a CR, must-pass legislation and therefore take this essential Republican agenda and have Democrats pass it,” Grijalva told another media outlet prior to the release of the letter.

Theoretically, if a chunk of House Democrats’ thin four-seat majority caucus share Grijalva’s attitude towards including the fossil fuel concessions in a CR, it could set the stage for a government shutdown.

However, just months out from a midterm season expected to be rough for Democrats, a shutdown is a bad look—and many Democrats may prefer simply to accept the deal rather than risk it.

In a statement to another media outlet, Grijalva insisted that he was not, in fact, trying to cause a government shutdown with the demand, but instead said he simply wanted the two to be separated.

“This is not trying to torpedo anything. This is saying the [CR] and the budget is critical, yes, but let’s do this other one where everybody is accountable,” Grijalva said.

Some other Democrats in the lower chamber have signaled similar attitudes against the “smoke-filled room” deal.

“If we want to streamline permitting for critically important projects that help solve the climate crisis there’s absolutely a conversation to be had and maybe a bill that would help with that, but this framework that came out of the smoke-filled room with Manchin and Schumer doesn’t work for me,” Rep. Jared Huffman (D-Calif.) told another media outlet.

“You can tell members ‘if you vote against this you’re shutting down the government,’ but most of us are a little smarter than that and we know that you can have a backup CR ready to go that funds the government without all the fossil fuel baggage,” Huffman said.

The burgeoning conflict fits into the context of a long-running split between moderate and progressive Democrats that has caused a series of headaches for Democrat leadership, particularly in the House, during the 117th Congress.

There have been some indications from Republicans that despite their longtime support of cutting fossil fuel regulations the party will not support a stop-gap spending bill if any extraneous legislation is tied to the package—including the legislation requested by Manchin. Republicans have suggested that this is the price that Democrats must pay for their series of partisan packages that were passed during the 117th Congress without any GOP support or input.

It remains unclear whether the deal will be able to win enough support to pass through both chambers of Congress, as elements in both parties have signaled frustration with Manchin and the content of the agreement.