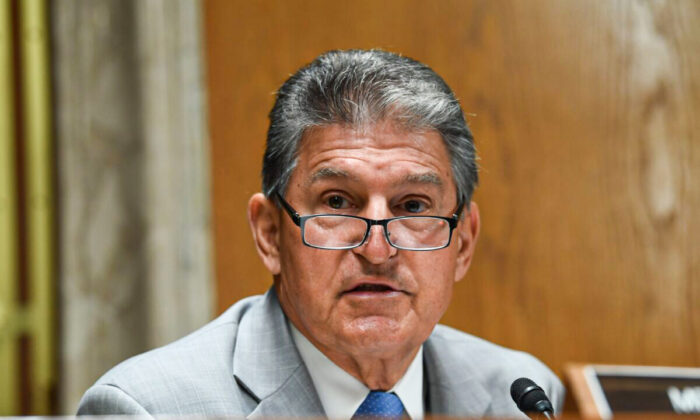 Sen. Joe Manchin (D-W.Va.) said on Dec. 19 that he won’t support President Joe Biden’s sweeping social and climate spending package, often dubbed “Build Back Better,” which might imperil the House-approved version of the legislation and put the remainder of Biden’s agenda in jeopardy.

The Senate left for its Christmas break on Dec. 18 without voting on the measure. Biden himself said the bill won’t be approved in 2021.

“I cannot vote to continue with this piece of legislation,” Manchin told “Fox News Sunday.” “I can’t get there.”

Manchin has been a key holdout on the legislation, worth nearly $1.9 trillion, which could only be approved by Senate Democrats via budget reconciliation. The process only requires 51 votes, meaning that if Manchin and all Senate Republicans vote ‘no’ on the measure, it will fail.

“This is a ‘no’ on this legislation. I have tried everything I know to do. And the president has worked diligently,” Manchin said on Dec. 18, also noting that Biden has “been wonderful to work with. He knows I’ve had concerns and the problems I’ve had.”

Instead, the White House and Congress “should all be directing our attention toward the [new] variant, a COVID that we have coming back at us in so many different aspects in different ways, it’s affecting our lives again,” the senator said, referring to the Omicron variant that emerged in southern Africa in November and is now present in dozens of U.S. states.

“So I think that’s where our attention needs to be directed toward immediately,” he said.

Increasing inflation may cost millions of American households more than $3,000 in additional expenses in 2021, according to a report recently released by Wharton School of the University of Pennsylvania. The report estimates that lower-income households spend more of their budgets on goods and services that were affected by inflation and will spend 7 percent more on them.

In a statement following his announcement, Manchin said he’s been meeting with Biden, Senate Majority Leader Chuck Schumer (D-N.Y.), and House Speaker Nancy Pelosi (D-Calif.), among others, to try to come to an agreement.

“I have made my concerns clear through public statements, op-eds, and private conversations,” the statement reads. “My concerns have only increased as the pandemic surges on, inflation rises, and geopolitical uncertainty increases around the world.”

Following Manchin’s comments, progressive Democrats and self-described socialists criticized the West Virginia senator, considered by many to be the most conservative Democrat in the upper chamber.

“I think he’s going to have a lot of explaining to do to the people of West Virginia,” Sen. Bernie Sanders (I-Vt.), a self-described democratic socialist, told CNN on Dec. 19. “I hope that we will bring a strong bill to the floor of the Senate as soon as we can.”