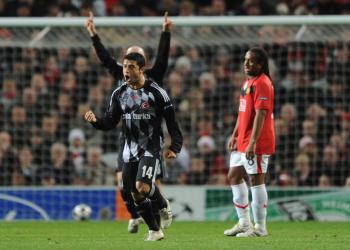 By Martin Murphy and Rahul Vaidyanath
Print
Manchester United was beaten 1–0 at Old Trafford by Turkish team Besiktas, who reversed their home defeat to United earlier in the competition. Sir Alex Ferguson’s team still needs a point from their final game to top Group B.

United’s young guns were given the chance to shine at home on Wednesday night in what was supposed to be the occasion where the home side topped Group B and also equaled Arsenal’s Champions League record of 24 consecutive games unbeaten at home.

United started well and appeared to be in the ascendancy. They came close to getting the opener after 13 minutes when a free header from Nemanja Vidic was directed wide.

United was in control and had the lion’s share of possession for the first 20 minutes when disaster struck—Besiktas’s Rodrigo Tello netted a goal against the run of play. His long-range shot deflected off a defender and found the far side of the net.

Ferguson perhaps underestimated his opposition, who have been playing well in their home league. United were always hopeful that they could produce a result but unfortunately for them, they were left wanting at full time.

The United manager stuck with his young guns until around 70 minutes into the game before deciding to take action. Michael Owen replaced Ji-Sung Park. Shortly after that a double substitution saw Darron Gibson and Rafael replaced with Michael Carrick and Patrice Evra. Ferguson doesn’t like to lose so he was obviously switching to Plan B. United’s midfield then started to take more shape.

Besiktas goalkeeper Rustu had a fantastic finish to his night when he rescued his team twice with spectacular diving saves off United headers. A fairytale ending was realized when the final whistle blew.

United’s set plays were very poor and Sir Alex Ferguson’s younger players are not as advanced as he would like to think. If United are to be competitive in the Champions League for years to come, the checkbook will have to play a major part in bolstering his current squad.

Real Madrid defeated FC Zurich 1–0 in a match that saw Cristiano Ronaldo’s return to action. The Portuguese superstar started on the bench but replaced Raul after 70 minutes of play.

AC Milan barely held on to a 1–1 draw with Marseille in Milan. Marseille hit both the crossbar and the post in the second half and now remain in third place in Group C with seven points behind Real Madrid who have 10 and AC Milan with eight.

In Group A, Bordeaux assured themselves of top spot with a 2–0 home victory over Juventus while Bayern Munich beat Haifa 1–0. These two results set up a blockbuster match on Dec. 8 in which Bayern Munich travels to face Juventus. One of these two giants of European soccer will not reach the knockout stages.

Chelsea defeated Porto 1–0 to win Group D. Both Chelsea and Porto move on to the knockout stages. “We did what we had to do today and that was to get the win,” said Chelsea captain John Terry in an interview with Sky Sports.