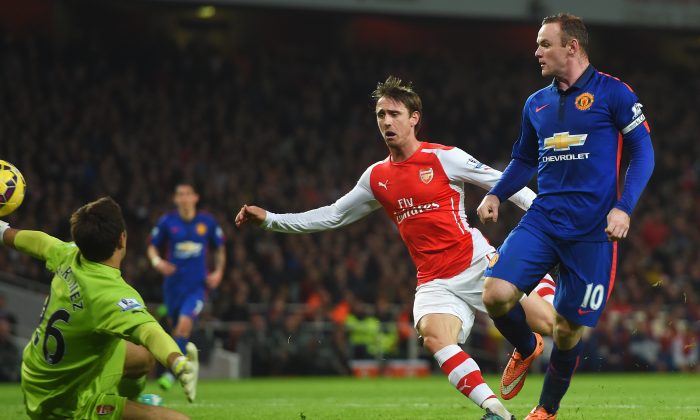 Manchester United’s smash-and-grab 2–1 win at Arsenal was probably the highlight of the club’s topsy-turvy season so far. The victory took Louis van Gaal’s team up to fourth in the table and the fans couldn’t have been happier at doing a number on one of their perennial rivals.

Unfortunately the euphoria rather glossed over the inescapable fact that Arsenal were the better side for all but about 15 minutes of the match and would have been out of sight by half time had they shown more composure in front of goal and had United keeper David De Gea not put in yet another outstanding performance. But that’s football sometimes.

Van Gaal reverted to his favored system of three central defenders and two wing backs against Arsenal, and although the defense did not exactly look rock solid, the players at least appeared to be considerably more comfortable with the formation than they had been earlier in the season.

The two youngsters Paddy McNair and Tyler Blackett inevitably made one or two errors, but would seem to have a bright future. The more experienced Chris Smalling did a good job of tidying up and showed much more maturity than three weeks ago when he was sent off for a reckless challenge in the Manchester derby.

Antonio Valencia is ideally suited to the wing back role and Ashley Young has adapted better than expected and did well after coming on as a substitute for Luke Shaw after the first quarter of an hour.

The three points hijacked from Arsenal, added to the three gained from a far from convincing 1–0 result against Crystal Palace the week before, has pushed the Red Devils up into the Champions League places. But one hardly dares imagine what the likes of Lionel Messi, Cristiano Ronaldo, or Thomas Müller might do to that still fragile defense.

In fact, if we go back to the weekend of the Manchester derby, which roughly marked the completion of the first quarter of the season, United’s defeat made it the club’s worst start since 1986 when Ron Atkinson was sacked to make way for Alex Ferguson.

Under David Moyes, after the same number of games (10) last year, United had four more points, were two places higher in the table, only eight points (as opposed to 13) behind the leaders, and still in the League Cup.

Notwithstanding the last two wins, van Gaal’s side are still two points shy of the 21 that Moyes’ team had managed after 12 matches. Right now, they remain 13 points adrift of leaders Chelsea, whereas this time last year they were only 10 points behind then top club Arsenal. But this is more a function of Chelsea’s furious start to the campaign.

Of course it must be conceded that van Gaal has had terrible luck with injuries—particularly to defenders. Rafael, Phil Jones, and Marcos Rojo are still some way from being available, with the latest blow being the serious knee injury suffered by Daley Blind while on international duty for the Netherlands.

He is likely to be out for at least three months. The news is better regarding Jonny Evans and Radamel Falcao who could be available for selection in a couple of weeks.

To add to this tale of woe, 18-year-old England international left back Shaw limped off he Emirates pitch after turning his ankle in a clash with England colleague Alex Oxlade-Chamberlain. The highly rated Shaw became United’s 40th injury already this season.

He has made only six appearances so far—not a great return for his £30 million (US$ 48million) price tag. Unfortunately, these things happen in football.

Light at the End of the Tunnel?

Despite those indifferent statistics, the Old Trafford faithful seem to be much more optimistic than this time last year and are prepared to be patient with van Gaal. This is essentially because the Dutchman clearly does have a long-term plan. He is at least attempting to rebuild the wall, in contrast to Moyes who simply appeared to be trying to paper over the cracks.

Indeed, there are some genuine grounds for optimism. Wayne Rooney has established a good working relationship with his new boss and is in great form. The only downside, so far as the skipper is concerned, is that he is not scoring enough goals primarily because he is frequently having to go very deep to generate the attack.

Angel Di Maria slotted into the setup quicker than anyone expected and Marouane Fellaini is playing his best football by far since arriving in Manchester. Michael Carrick’s return from long-term injury has been a real bonus and he is looking good even though still some way from his imperious best.

Robin van Persie has been a little out of sorts, but one feels that it will only take one of those special RvP moments to rectify that. If he needs any incentive, the rise of the highly promising youngster James Wilson should keep the star striker on his toes.

If there is one player who has not quite lived up to expectations it would have to be Ander Herrera. After an impressive preseason, his Premier League debut was eagerly anticipated. However, he was noticeably outmuscled in midfield by Jonjo Shelvey in that ignominious opening day home defeat to Swansea. The young Spaniard clearly has skill in abundance, but whether he is tough enough to play midfield in the Premier League remains a worrying question.

The manager has enjoyed precious little good fortune since the start of the campaign, but that changed against Arsenal. He was naturally delighted and said in an interview published on the official United website: “Of course, it is the first away victory so the players were very excited in the dressing room but, okay, it is only one victory.

“We have to confirm that with victories in the next two games that we play at home. Then we can say, okay, we have the spirit now and we will go looking at upstairs and not downstairs.”

Even the staunchest of supporters would probably admit that Manchester United will not be challenging for the Premier League crown this year or the UEFA Champions League trophy next year, but at least there is a strategy in place for the future and a glimmer of light at the end of the tunnel.