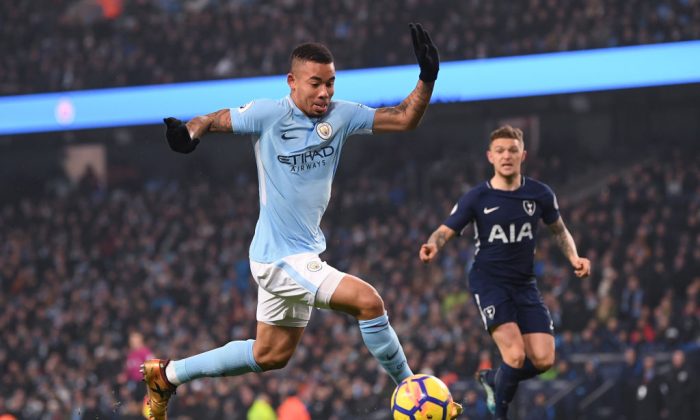 Gabriel Jesus of Manchester City runs with the ball during the Premier League match between Manchester City and Tottenham Hotspur at Etihad Stadium on Dec 16, 2017 in Manchester, England. (Laurence Griffiths/Getty Images)
International

Manchester City’s Almost Perfect Season Continues with Win Over Spurs, Nearest Rivals all Win but are a Long Way Behind

The eighteenth round of the English Premier League season got underway with the Saturday Dec 16 early match where Leicester City hosted Crystal Palace at the King Power Stadium where, after building on their recent record of 7 games without defeat after starting with no points after 7 games, the visitors struck early through Christian Benteke, scoring Palace’s first away goal of the season with a header from a right wing cross, who then set up Palace’s second for Wilfried Zaha in the 40th minute, and then sealed a 3-nil Palace victory when Bakary Sako converted the third goal deep in stoppage time, firing into the top left hand corner of the net from the edge of the box, with any chance of a Leicester fightback having been extinguished with the 61st minute sending off of Wilfred Ndidi by referee Martin Atkinson for diving.

In later games, Arsenal entertained Newcastle United at the Emirates Stadium, and dominated the first half, but only had Mezut Ozil’s volleyed goal to show for a 1-nil half time lead, and still failed to turn possession and chances into goals in the second half either, thus claiming a 1-nil win which pushed Newcastle into the relegation places given their acquisition of only one point in the past 7 games, further emphasising their need for reinforcements in the upcoming January transfer window in order to retain their EPL place.

Brighton hosted Burnley at the Amex Stadium in a game which emphasised the home side’s need for a prolific striker after Glenn Murray had a penalty kick saved, and Anthony Knockaert hit the post before the game ended in a nil-all draw, a point favouring the visitors push for a European qualification place more than benefiting the host’s push to avoid the relegation battle.

Chelsea entertained Southampton at Stamford Bridge, and took a 1-nil lead into half time due to Marcus Alonso’s 30 yard free kick in the 47th minute, and then had a strike from Hazard disallowed when Cesc Fabregas was deemed offside when returning a one-two, and failing to add to their tally to still win 1-nil, though will rue the high number of shots and chances that went begging.

Stoke City entertained West Ham at the Bet 365 Stadium, with manager Mark Hughes under pressure to get a result to halt their slide and run of defeats but, 10 seconds after Ryan Shawcross had hit the post for Stoke, full back Eric Pieters was adjudged to have fouled Manuel Lanzini in the penalty box, with the resulting penalty kick converted by West Ham captain Mark Noble in the 19th minute, Marko Arnautovic adding West Ham’s second in the 75th minute after having twice hit the woodwork, and Diafra Sakho subsequently converting the third for a 3-nil victory and the Hammers’ first away win of the season to move out of the relegation places and up to 15th; Watford hosted Huddersfield at Vicarage Road, conceding a 6th minute offside goal to Huddersfield’s Kachunga, a lead doubled by Aaron Mooy’s 23rd minute strike, before captain Troy Deeney received his marching orders for a red card in the 33rd minute, followed by Laurent Depoitre’s third goal in the 50th minute, before Huddersfield’s Jonathan Hogg also received a red cad, this one for a second yellow card for a foul on Richarlison, Abdoulaye Doucoure’s reply for Watford in the 69th minute, and Huddersfield’s fourth from an 89th minute Aaron Mooy penalty kick completing his brace, for a 4-1 victory.

Manchester City entertained Spurs at the Etihad Stadium in the late match, with City taking a first half lead when an unmarked Ilkay Gundogan headed home a corner, but then stepped the intensity up in the second half, with several players breaking in the 70th minute with the final ball releasing a racing Kevin de Bruyne into the penalty box in line with the left hand post where he struck a powerful diagonal shot which went into the roof of the net via Spurs goalkeeper Hugo Lloris’ arms, Gabriel Jesus’s spot kick slamming into the left hand post after Kevin de Bruyne being brought down, and a brace of what turned into simple tap ins for Raheem Sterling in the 80th and 90th minutes, before Christian Eriksen’s 93rd minute consolation for Spurs in City’s 4-1 victory. The result extended Manchester City’s winning run to 16 consecutive games, closing in on the current European record of 19 consecutive wins held by Bayern Munich during Pep Guardiola’s recent reign as coach in Germany’s Bundesliga.

In Sunday’s games, the early kick off saw West Bromwich Albion entertain Manchester United at the Hawthorns, with United taking control with a 27th minute header from Romelu Lukaku into the top right corner of the net from a left wing cross, followed by a Jesse Lingard shot from the edge of the box after 35 minutes that deflected off of Albion defender Ahmed Hegazi, before a goal from close range from Gareth Barry in the 77th minute for the hosts caused some anxiety for the visitors, who ultimately held out for a  2-1 victory that made them the sole second placed team in the EPL with 41 points, still trailing leaders Manchester City by 11 points; whilst the later kick off saw Bournemouth host Liverpool at the Vitality Stadium, with the visitors taking control after Philippe Coutinho collected the ball 30 yards out in the 20th minute before beating 2 Bournemouth defenders and driving the ball past goalkeeper Asmir Begovic at the near post, Dejan Lovren adding a second in the 26th minute when stooping low to head in a ball hooked back by Roberto Firmino, Mohamed Salah cutting in from the right hand corner of the penalty box towards the right corner of the 6 yard box before dribbling past 2 defenders and planting the ball into the bottom left hand corner of the net in the 44th minute for a 3-nil half time lead, and Roberto Firmino completing the comprehensive 4-nil win in the 66th minute when heading Philippe Coutinho’s cross past goalkeeper Begovic. The win lifts Liverpool up to fourth in the table with 34 points.

Manchester City lead the table with 52 points from 18 matches, with Manchester United second with 41 points, Chelsea in third on 38 points, Liverpool 4th on 34 points, and Arsenal fifth on 33 points, whilst Swansea hold up the table with 12 points from 17 matches, one place below West Bromwich on 14 points in 19th, and Newcastle in 18th with 15 points, though Swansea have played a game less than the other 2 sides. With Manchester City now 11 points ahead of their nearest rivals United, it would require a dramatic turn of events for any of the trailing clubs to get close enough to challenge them for this year’s title given that they are the only unbeaten team in the EPL, have only dropped points in the early season a 1-all draw with Everton at Goodison, and would need to lose at least 4 times during the remainder of the 38 game season for this to occur.