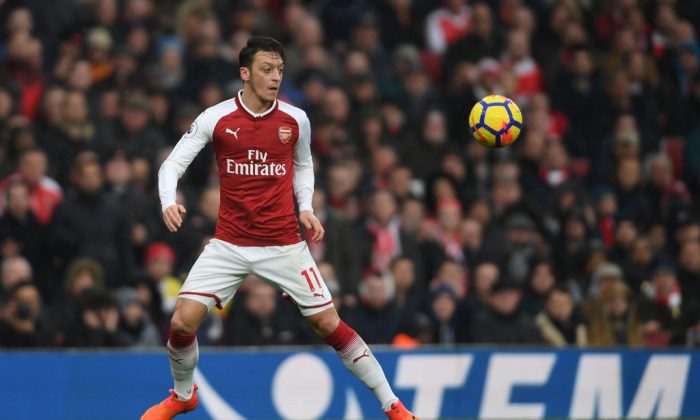 Mesut Ozil of Arsenal in action during the Premier League match between Arsenal and Tottenham Hotspur at Emirates Stadium on Nov 18, 2017 in London, England. (Mike Hewitt/Getty Images)
International

Round 12 of the English Premier League season got underway with Saturday’s early match being the north London derby between Arsenal and Spurs at the Emirates Stadium, with Arsenal claiming bragging rights over their fierce rivals with a 2-nil victory, courtesy of 2 first half goals from Shkodran Mustafi and Alexis Sanchez, a result that lifts Arsenal to within a point of a disappointing Spurs team, though the result is really another plus for Manchester City with their chasing rivals taking points off of each other whilst their relentless progress continues.

In Saturday’s later games, Bournemouth entertained Huddersfield at the Vitality Stadium, and achieved a resounding 4-nil victory which will buoy their spirits, lift them away from the relegation places, and ease the pressure on manager Eddie Howe, the goals coming from a Callum Wilson hat-trick, plus the third goal from Harry Arter, and attained in spite of the loss of defender Francis at the end of the first half; Burnley pushed themselves to within a win of second place with their 2-nil win against Swansea City at home at Turf Moor, with Jack Cork and Ashley Barnes claiming the vital first half goals, and piling pressure onto Swans’ boss Paul Clement.

Crystal Palace hosted Everton at Selhurst Park, with the hosts looking to get their second win of the season and close the gap between themselves and the 17th placed team, whilst Everton were looking to add to the win from their last game against Watford. The game ended in a 2-all draw after an explosive start and first half, with Leighton Baines’s 6th minute penalty cancelling James Macarthur’s first minute opener, before Wilfried Zaha restored Palace’s lead in the 35th minute, only for Oumar Niasse to strike a first half injury time equaliser and a share of the points, with neither side able to claim a second half winner.

Leicester City entertained Manchester City at the King Power Stadium, with the visitors claiming the points with a 2-nil victory, courtesy of  a late first half opener from Gabriel Jesus, and a superb strike from Kevin de Bruyne 4 minutes into the second half, but failing to add to their win and goal difference from several good opportunities; Liverpool hosted Southampton at Anfield, winning the game 3-nil to put pressure onto Saints’ manager Mauricio Pellegrino, with a first half brace from Mohammed Salah and a second half strike from Phillippe Coutinho providing the goals ; and West Bromwich entertained Chelsea at the Hawthorns, with the hosts’ looking to halt their slide towards the relegation places and ease any pressure on manager Tony Pulis, but fell to a heavy 4-nil defeat due to a brace from Eden Hazard, and additional goals from Alvaro Morata and Marcus Alonso, leading to disgruntlement amongst Baggies fans after falling from the safety of last years 10th place finish to involvement in the relegation fight.

In the late kick off game, Manchester United entertained Newcastle United at Old Trafford and, after Dwight Gale had converted DeAndre Yedlin’s pull back for the visitors, United struck back to lead 2-1 at half time with Anthony Martial’s 37th minute equaliser, and Chirs Smalling’s header, before extending their lead twice in the second half, first with Paul Pogba’s 54th minute close range finish, and secondly with Romelu Lukaku’s fourth, his first goal in 8 matches, for a 4-1 victory that consolidates their second place position, 8 points behind leaders Manchester City. The game also saw the return to action of Zlatan Ibrahimovich for Manchester United, his first since April’s Europa League tie with Anderlecht, for the last 13 minutes from the substitute’s bench.

In Sunday’s only game, Watford hosted West Ham at Vicarage Road, with Watford manager Marco Silva trying to get them back to their early season performances, whilst new West Ham manager, David Moyes, was looking to get his tenure off to a winning start. Watford won the game 2-nil courtesy of a first half strike from Will Hughes after West Ham failed to clear, and a second half finish from Richarlison after breaking down the left side before cutting into the box and firing a shot that went through goalkeeper Hart. The win lifts Watford up to eighth in the table, whilst the defeat leaves west Ham in the relegation places, and underlines to task facing newly appointed manager Moyes.