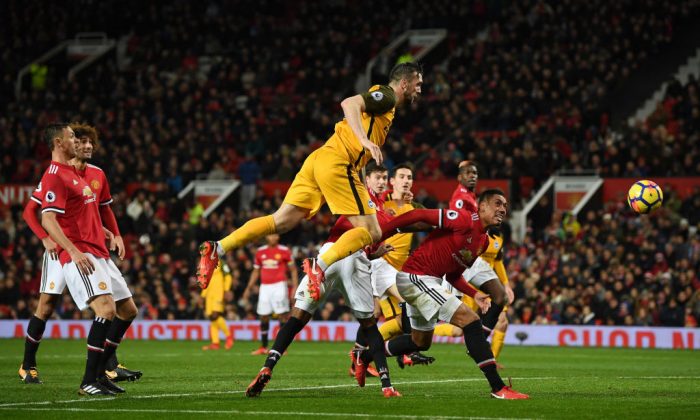 Manchester City Lead the EPL with 37 Points After 13 Matches

The thirteenth round of the English Premier League season got underway with Friday night’s match (Nov 24) between West Ham and Leicester City at the London Stadium, with West Ham still seeking their first win under new manager David Moyes after Monday’s defeat at Watford, and things looked bleak early on when Leicester City scored with their first attack when Marc Albrighton converted Jamie Vardy’s cross. However, West Ham were given a boost when Cheikhou Kouyate equalised just before half time, though neither side could find a second half winner. The draw still leaves West Ham in the relegation places, but gives some optimism that they can improve results and climb the table, though a quick look at the fixture list shows a very tricky period to come with Chelsea, Manchester City and Arsenal to play before the New Year.

In Saturday’s games, Crystal Palace hosted Stoke City at Selhurst Park, with the visitors taking the lead through Xherdan Shaqiri, before Crystal Palace struck back with an equaliser from Reuben Loftus-Cheek, and then an injury time winner from Mamadou Sakho for a 2-1 victory, a win that moves them to within a point of Swansea a place above them, and 3 points below West Bromwich in 17th place above the relegation zone, though still on the bottom of the table ;  Manchester United hosted Brighton at Old Trafford and, despite having most of the play and chances, won with a late own goal from Brighton’s Lewis Dunk deflection of an effort from United’s Ashley Young, for a 1-nil victory that moves them 3 points closer in second to leaders Manchester City, until City play at Huddersfield on Sunday; Newcastle entertained Watford at St.James Park, and fell to their fourth successive defeat, a 3-nil win for Watford, courtesy of Will Hughes second goal in consecutive games, an own goal from Newcastle’s DeAndre Yeddlin, and a third from Andre Gray; Spurs hosted West Bromwich at Wembley Stadium, and conceded an early fourth minute goal from Salomon Rondon, a lead that West Brom used to frustrate the hosts with their 75% possession, until Harry Kane converted a Dele Alli cross late on for a 1-all draw that leaves Spurs 10 points behind leaders Manchester City; Swansea entertained Bournemouth at the Liberty Stadium, with the result an uninspiring nil-all draw that leaves Swansea second from bottom, 1 point above cellar dwellers Crystal Palace, and continues the pressure on the position of manager Paul Clement, though Leroy Fer will rue squandering an opportunity to win the game for Swansea.

In the late kick off game, Liverpool entertained Chelsea at Anfield, with the game ending in a 1-all draw after Mohamed Salah had given Liverpool the lead in the 62nd minute by firing home after Philippe Coutinho had broken to feed Alex Oxlade-Chamberlain who prodded the ball goalwards, and then Chelsea equalising in the 85th minute, after a spell of pressure, when Willian crossed, only to see the ball sail straight into the net. The draw means that Chelsea moved to third in the table on 26 points from 13 games, with Spurs fourth, and Liverpool fifth, whilst Burnley and Arsenal, who play each other on Sunday are also in contention for the champions league places at present.

In Sunday’s early game, Southampton hosted Everton at St Mary’s Stadium, with both manager’s needing a win to boost their respective team’s positions, as well as bolster their own individual roles. After Southampton opened the scoring with a 14th minute finish from Dusan Tadic, Everton responded with a long range effort to equalise in the 45th minute from Gylfi Sugurdsson past Saints’ goalkeeper Fraser Forster via the crossbar, before Charlie Austin, in his first EPL start of the season for Saints, scored a brace of headers early in the second half, and captain Steven Davis added a fourth for a 4-1 win with 2 minutes remaining, scoring past Everton goalkeeper Jordan Pickford from the edge of the box. The win moved Southampton up to 11th and eased the pressure on manager Mauricio Pellegrino for now, but his counterpart, Everton’s stand in manager David Unsworth, now sees his side 2 points above the relegation places after a run of one win in 7 games on his watch. After much speculation, Everton appear no closer to appointing a permanent manager to replace the dismissed Ronald Koeman; then Burnley entertaining Arsenal at Turf Moor, and the visitors claiming a 1-nil victory courtesy of an injury time penalty from Alexis Sanchez, after a contentious decision from referee Lee Mason that Burnley’s James Tarkowski had pushed Arsenal’s Aaron Ramsey, a victory which moves Arsenal up to fourth; and Huddersfield hosted leaders Manchester City at the John Smith Stadium in the day’s late game, with the hosts taking a first half lead when City’s Nikolas Otamendi unfortunately directed a flicked on corner into his own net, before City’s Sergio Aguerro equalised in the second half, after Raheem Sterling had been brought down, and City then claimed the victory when Sterling himself scored the winner with 6 minutes remaining with a fortunate ricochet that lobbed over the goalkeeper for a 2-1 victory.

The next round of games quickly follow with all sides playing last night Tuesday, (Nov 28) or Wednesday.