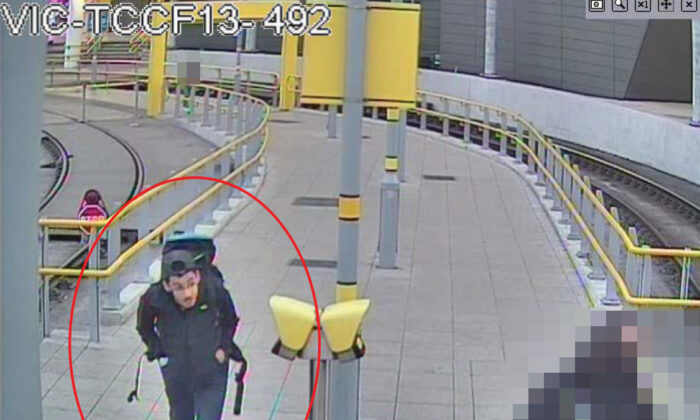 CCTV image of Salman Abedi at Victoria Station making his way to the Manchester Arena, where he detonated his bomb, in Manchester, England, on May 22, 2017. (Greater Manchester Police/Handout via PA)
UK

Salman Abedi had no active connection to law-abiding British society, the public inquiry into the Manchester Arena attack has heard.

The close family of the Manchester-born suicide bomber showed “scant regard” to the country’s laws and he had no role model to fit into life in Britain, according to an expert in Islamist extremism.

On Thursday, Matthew Wilkinson set out his report to the inquiry on Abedi’s path to radicalisation, which culminated in him committing the atrocity at the end of an Ariana Grande concert in May 2017, killing 22 people and injuring hundreds.

He concluded that three family members were the cause of Abedi’s Islamist extremist worldview—his younger brother, Hashem, jailed for life last year for aiding the bomb plot; his father, Ramadan, a suspect who remains in his native Libya; and his older brother, Ismail, who fled the UK in August.

Among factors involved in his radicalisation were an absence of civic connection and engagement in British life, the report found.

Wilkinson told the inquiry: “He [Salman] didn’t have a mechanism or a role model to fit into life in Britain. I think almost all his close family at some point have been convicted of petty crimes—theft, shoplifting, and that sort of stuff.

“His close family clearly held the law in this country in pretty scant regard. It didn’t really matter too much if they broke it. He had no active connection to law-abiding British society.”

Instead, Abedi showed an excess of identification with the Islamist struggle for control of Libya as his father took Salman and Hashem out of education in 2011 and 2012 to fight in the uprising against the then leader, Colonel Muammar Gaddafi, the inquiry heard.

Wilkinson said: “Salman was knocking around militias and people who had access to, and were using and training in the use of, heavy military equipment. It meant the use of violence in the name of Islam was becoming even more normalised in his worldview. It was just part of how his life was.

“Ramadan introduced his sons to the world of Islamist violence in a very practical sense.”

Between 2015 and 2017 Ramadan was mostly not in the UK and Ismail was left as the father figure back home in Manchester to supervise his younger brothers, he said, but in December 2015 Ismail was subject to a port stop at Heathrow Airport and was found to be in possession of “a toolkit of Islamic State propaganda.”

He said: “At the very point when Ismail was expressing sympathies for showing a commitment to the worldview of Islamic State he was acting in a parental role over Salman Abedi.”

Wilkinson said that from at least February 2014 social media posts showed that Hashem also had an Islamist extremist worldview.

Inquiry chairman Sir John Saunders asked: “Is it possible to say that Hashem was the primary radicaliser of the two?”

Wilkinson replied: “Yes, because Salman was chosen to do the deed. The pattern of these things tends to show that the people who do the radicalising do not do the deed. I would suggest that the more influential of the two in terms of personality and ideas was probably Hashem.”

He said there was a “royal flush” of factors involved in Abedi’s radicalisation, including prolonged disengagement with mainstream English education, prolonged parental absence and neglect, and an absence of effective school-based religious education or mosque-based education.

He said, in his opinion, Abdalraouf Abdallah, a convicted terrorist, groomed his lifelong friend Abedi into a violent Islamist extremist worldview.

Wilkinson added there was “very likely” to be more than one radicalisation influence in Libya where Salman and Hashem spent time in 2016 and 2017.

He said: ” It is so difficult to know who the characters involved were. That operational phase of the worldview seems to have a strong connection with something or someone in Libya.”

Wilkinson will return on Monday to continue his evidence.