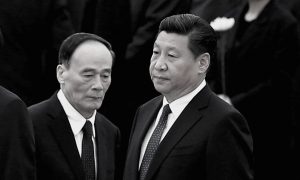 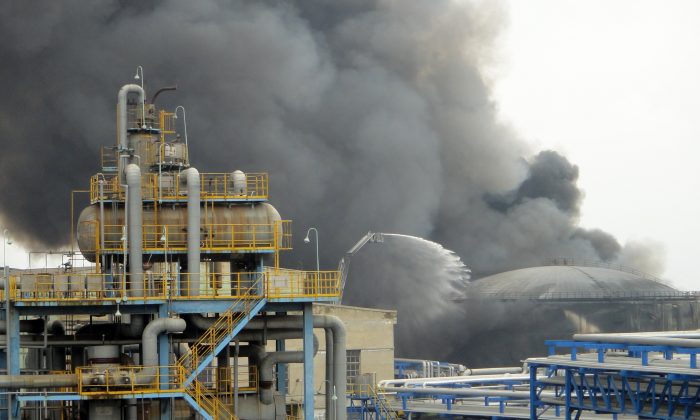 Firefighters attempt to extinguish a fire at PetroChina’s oil refinery in Dalian on August 29, 2011. Liao Yongyuan, General Manager of PetroChina, has been taken away for an investigation. (STR/AFP/Getty Images)
China

Manager at PetroChina, and Crony to Felled Former Chairman, is Removed From Post

The campaign to root out corruption in state-run companies in China—in particular the petro sector, long the stomping ground of felled overlord of the security apparatus Zhou Yongkang—has just netted the general manager of the largest oil company in China.

Anti-corruption authorities announced on March 16 that Liao Yongyuan, general manager at PetroChina, a state giant with over 500,000 employees and revenues of over $300 billion, has been placed under investigation for “serious violations of Party discipline and the law.”

Liao isn’t the first high-ranking executive at PetroChina to be placed under investigation.

The Central Commission for Discipline Inspection, the anti-corruption agency, has targeted state-run companies since the 18th National People Congress in November 2012. According to state-run Beijing News, a total of 107 high-ranking executives have been removed since, and the energy sector has seen the most executives sacked.

Though the anti-corruption agency failed to provide exacts details of what Liao was suspected of having done, Hong Kong Economic Times, a leading financial daily in Hong Kong, reported on March 17 that Liao was widely believed to be corrupt.

He had allegedly appointed cronies to positions in PetroChina, and pocketed illicit wealth through different oil products, according to the Hong Kong Economic Times. Liao’s corruption is not an isolated case, the report said, adding that such behavior was common.

Nicknamed the “Northwestern Tiger” in the company, Liao became the general manager of PetroChina’s subsidiary Tarim Oilfield Company at the relatively young age of 37. The announcement that he was investigated came less than two years after he was named to the post, in May 2013.

Liao was widely speculated to be in line for the top post at PetroChina when the current CEO, Zhou Jiping, retires, according to Chinese regime mouthpiece Xinhua News Agency.

In China, Liao is understood to be a crony to the former chairman of PetroChina, Jiang Jiemin. The commonly cited example of this tie is Liao’s behavior after a major explosion at an oil pipeline in Dalian City, Liaoning Province, in July 2010. Liao took the rap for the incident, so Jiang would not have to. The explosion resulted in one death and losses of 223 million yuan (about $35.7 million), reported Chinese media Peng Pai news.

Liao isn’t the first high-ranking executive at PetroChina to be placed under investigation. Jiang Jiemin, a long-term ally of the former security boss Zhou Yongkang, was placed under investigation in September 2013. Jiang was eventually stripped of his Party membership in June 2014 for his alleged crimes, including embezzlement. His case was handed to prosecutors on March 19, just three days after Liao was purged.