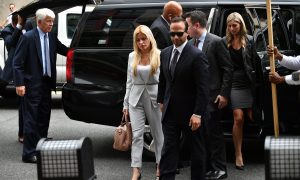 Paul Manafort pleaded guilty to two criminal charges on Sept. 14 as part of a deal with federal prosecutors that concluded the second trial for the veteran political operative.

Manafort pleaded guilty to conspiracy against the United States and conspiracy to obstruct justice, according to court documents (pdf) filed in the District of Columbia. The prosecutors recommended a sentence of 17 to 21 years as part of the plea agreement (pdf).

Manafort already faces an eight to 10 year sentence after the jury in a separate Virginia trial convicted him on Aug. 21 of eight counts of financial wrongdoing. Depending on the sentencing decisions of the judges in the two cases, Manafort, 69, could spend up to 31 years in prison.

Manafort served briefly as then-candidate Donald Trump’s campaign manager in 2016. Special counsel Robert Mueller charged Manafort as part of a probe into alleged coordination between the Trump campaign and Russia. Mueller was authorized to look into matters that arose from the Russia investigation, leading to the charges against Manafort, which are not related to the Trump campaign or to Russia.

As part of the plea deal with Mueller, Manafort agreed to forfeit three of his homes and two apartments in New York as well as several bank accounts. He also agreed to cooperate fully with the government in criminal investigations and prosecutions, which includes providing documents, testimony, and performing undercover activities.

Manafort has been in jail since mid-June. The judge in the District of Columbia case ordered his detention on June 15 after reviewing evidence (pdf) that Manafort attempted to tamper with witnesses and determining that the defendant could not be trusted to comply with the judicial process. Manafort pleaded guilty to witness tampering as part of the obstruction charge.

In his guilty plea (pdf), Manafort admitted to knowingly violating the Foreign Agents Registration Act by failing to register as an agent of a foreign power while conducting lobbying work for Ukraine in the United States. Manafort admitted to leading a lobbying campaign for Ukraine for nearly a decade and intentionally doing so without registering as a foreign agent.

As part of the lobbying campaign, Manafort admitted to hiring four former European heads of state and senior officials, including a former Austrian chancellor, an Italian prime minister, and a Polish president. Manafort paid the group 2 million euros to covertly lobby for Ukraine in meetings with U.S. lawmakers and journalists.

Manafort admitted to knowingly failing to report $15 million in income for his overseas work from 2010-2014. He concealed the income through a network of foreign banks and shell companies. Manafort also admitted to defrauding several banks by making false statements on loan applications.

“I feel very badly for Paul Manafort and his wonderful family. ‘Justice’ took a 12 year old tax case, among other things, applied tremendous pressure on him and, unlike Michael Cohen, he refused to ‘break’ – make up stories in order to get a ‘deal.’ Such respect for a brave man!” Trump wrote on Twitter.