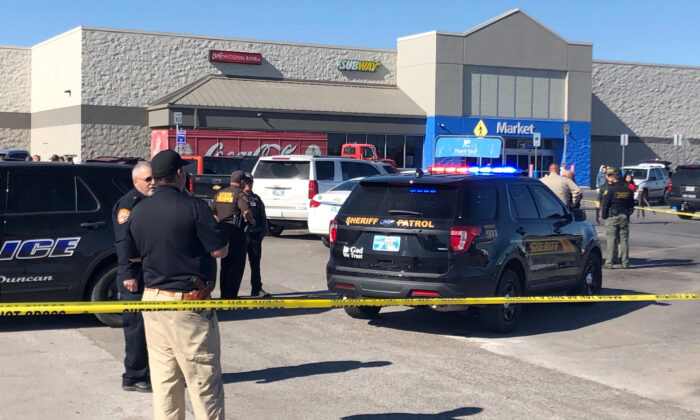 Law enforcement work the scene where two men and a woman were fatally shot outside a Walmart store in Duncan, Okla., on Nov. 18, 2019. (Sean Murphy/AP Photo)
Crime and Incidents

Man Wounded in Shootout With Police Outside Tulsa Airport

TULSA, Okla.—Airport police in Tulsa shot and wounded a man after he opened fire on a car carrying his wife, whom he tried to confront her after her flight landed, authorities said.

The man had threatened to harm the woman late Tuesday at Tulsa International Airport, Tulsa police said. The man opened fire on the car as the woman was leaving the property with her brother, authorities said.

Airport police returned fire, striking the man in the foot, said Tulsa Police Capt. Jerrod Hart. One of the airport officers was struck by gunfire but was wearing a protective vest that shielded him, Hart said.

The woman and her brother weren’t hurt, authorities said.

The airport officer was taken to the hospital as a precaution and released shortly thereafter, said Andrew Pierini, the airport’s chief commercial officer. The incident did not disrupt flight operations, he said.

The man who opened fire was also taken to a hospital. Authorities have not yet released his name or detailed any charges he may face. Police said they were working to determine why the man was trying to confront his wife.