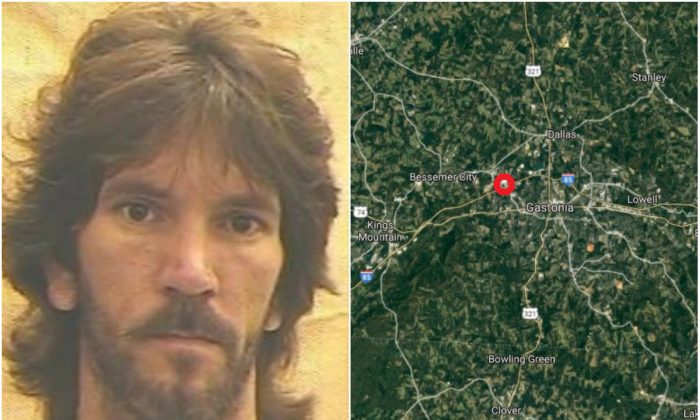 L: David Alan Woods. (Gastonia Correctional Center). R: The approximate location where Woods died in a car crash in Gastonia, N.C., on Feb. 26, 2018, according to police. (Screenshot via Google Maps)
Crime and Incidents

David Alan Woods, 46, was serving life in prison for being an accomplice to a murder when he managed to escape. But after only about an hour as a fugitive, he was found dead.

Woods was incarcerated at Gaston Correctional Center. On Monday, Feb. 26, he was on a work detail in Lowell, North Carolina, the Gaston Gazette reported.

By 2:15 he had crashed the truck on Interstate 85. The truck rolled several times and Woods was ejected from the vehicle, dying at the scene, according to Gastonia Police.

He was not being pursued at the time, police said.

Woods had been serving a life sentence for second-degree murder since 1995.

On Oct. 31, 1993, he and another man, Jeffrey Dickens, used a hammer to pry open window panes of a trailer, then Dickens hit the occupant, 89-year-old Roseline Murphy in the head with the hammer, killing her, according to court records.

Woods was drunk and on marijuana at the time. After the murder both men went to a known crack house to buy drugs.

Woods pleaded guilty a day before his trial.

Dickens, 44, is serving his life sentence for first-degree murder in a state prison.

The Division of Prisons is investigating the circumstances of Woods’s escape, according to Jerry Higgins, spokesman for the North Carolina Department of Public Safety.