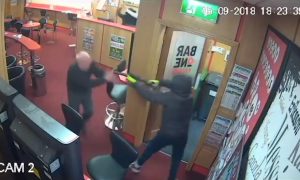 A man wielding a hammer burst into a restaurant in New York City on Jan. 15, killing a chef and leaving two others critically injured.

The attacker, who has not been identified, walked into the Seaport Buffet in the Sheepshead Bay neighborhood of Brooklyn, near Coney Island, just after 5 p.m.

He first attacked the 60-year-old owner of the establishment before moving into the back of the restaurant and hitting the chef and a 50-year-old worker.

All three were rushed to a nearby hospital where the chef, identified as Fufai Pun, 34, was declared dead.

Samantha Randazzo, the owner of Randazzo’s Clam Bar, which is next to the buffet, said that customers fled from the buffet into her restaurant.

“A couple of people, customers from the restaurant, came in here, and we let them in and they said a guy came in crazy with a hammer and started hammering certain people, random people,” Randazzo told NBC 4.

She said a worker from the buffet also came running in to warn them about what was happening.

“I heard a bunch of people screaming: ‘He’s killing people! Lock all the doors!’” she added to the New York Post. She said that she and her workers tried helping people out but were afraid to leave Randazzo’s because they didn’t know where the man with the hammer was.

“We tried helping people who were trying to come in, customers, but we were scared to even walk out,” she told NBC 4. “We didn’t know where he was.”

No description of the suspect has circulated but Randazzo told WABC that witnesses described what he was wearing. “They said he went in a city uniform and he came in and just went crazy,” she said.

Blood was spattered around the buffet after the attack, a police source told the Post.

“This was a grisly murder scene. A serious amount of blood was spilled,” the source said. “It sucks. These guys were just working and this [expletive] comes in.”

A customer said that the man who was attacked besides the chef and owner was a Chinese man.

“I saw the Chinese guy, waiter, he was walking by this all bleeding. He hold his head, his two hands, and he fell by the door,” the customer told CBS. “It’s very freaking scary,” added Randazzo’s employee Elena Randazzo.

A random hammer attack inside a Brooklyn restaurant left one man dead and two others critically hurt. Sources tell CBS2 the suspect burst inside during the dinner rush and started randomly striking employees. @BurrellTV reports: https://t.co/3sdbPzYfAm

Witnesses said they locked the door to the restaurant so no one could get in.

“We were like. ‘Oh my God.’ He’s running around, lock the door and that’s what we did. We locked the door because we didn’t know where he was. Nobody was getting in the restaurant,” one witness told NY1.

“He seemed to be not normal, sick you know? He needs help,” added another witness.

The suspect, 34, was tracked down several blocks away and arrested. Investigators said he will undergo a psychiatric evaluation and that the attack appears unprovoked.

“It was unprovoked. It appears random. He is an emotionally disturbed person,” a police source told the New York Daily News.

No charges have been laid as yet.