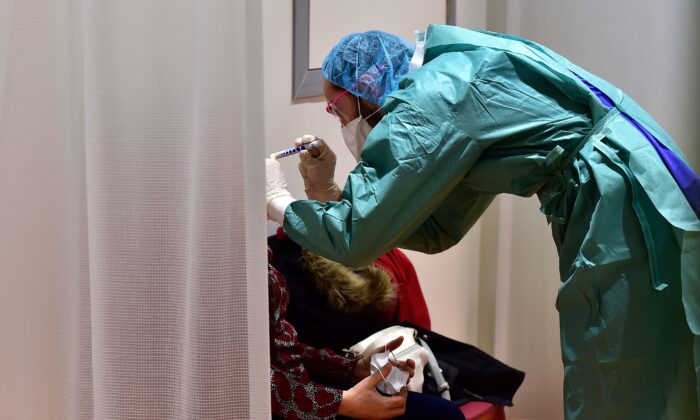 A doctor examines a patient at the hospital screening unit of the CHU Pellegrin in Bordeaux, southwestern France (Georges Gobet/AFP via Getty Images)
By Jack Phillips

A Florida man who was diagnosed with the CCP virus claimed that he was saved by an anti-malaria drug that has been touted by the White House, although his doctors have said otherwise.

Rio Giardinieri, 52, told Fox11 that he suffered from a cough, headache, fatigue, and back pain for five days after contracting the virus, saying he may have got it during a conference in New York. He was later diagnosed with the virus pneumonia before he was placed in the ICU and received oxygen.

Doctors said that after about a week, his condition worsened and Giardinieri told his wife and children that he would likely pass away at the Memorial Regional Hospital in South Florida.

“I was at the point where I was barely able to speak and breathing was very challenging,” Giardinieri said. “I really thought my end was there.”

A friend then sent him an article about anti-malaria drug hydroxychloroquine, which is also used to treat lupus. Giardinieri said he asked an infectious disease doctor about it.

“He gave me all the reasons why I would probably not want to try it because there are no trials, there’s no testing, it was not something that was approved,” said Giardinieri.

“And I said, ‘Look, I don’t know if I’m going to make it until the morning,’ because at that point I really thought I was coming to the end because I couldn’t breathe anymore,” Giardinieri continued. “He agreed and authorized the use of it and 30 minutes later the nurse gave it to me.”

After an hour of taking the pills, he said that he suffered some more complications and was given Benadryl as well as other drugs. When he woke up at 4:45 a.m. the next day, it felt as though “nothing ever happened,” according to Giardinieri.

Giardinieri said he has no fever, pain, and can breathe again.

However, doctors said that they believe that his body fought off the virus and it wasn’t a reaction to the medication.

But Giardinieri said he believes otherwise.

“To me, there was no doubt in mind that I wouldn’t make it until morning,” he said. “So to me, the drug saved my life.”

President Donald Trump has made references to using hydroxychloroquine on Twitter and in press conferences, although some medical experts have said it’s not clear if the drug works and have cautioned people not to hoard it.

Health officials in Arizona issued a warning to the public after a man took chloroquine phosphate and died. Chloroquine phosphate is an additive used to clean fish tanks that is found in some anti-malaria medication, according to The Associated Press, which added that the difference between the fish tank cleaning additive that the couple ingested and the anti-malaria drug is the way they are formulated.

“Most patients who become infected with COVID-19 will only require symptomatic care and self-isolation to prevent the risk of infecting others,” Arizona’s Banner Health said in a statement, Fox6 reported. “The routine use of specific treatments, including medications described as ‘anti-COVID-19’, is not recommended for non-hospitalized patients, including the anti-malarial drug chloroquine.”

The Food and Drug Administration said in a statement released last week that currently, there are “no FDA-approved therapeutics or drugs to treat, cure or prevent COVID-19.”

“Chloroquine is an extremely toxic drug with a terrible side effect profile. Hydroxychloroquine is far safer, but its side effects are still significant,” Meghan May, a microbiologist at the University of New England College of Osteopathic Medicine in Biddeford, Maine, told news outlets. “If it is not abundantly clear that it is beneficial, giving this drug to a critically ill patient feels risky.”