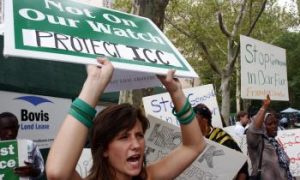 Brian Perkins of Brantford, Ontario, won a Honda Insight hybrid on Monday for ending his 30-year smoking habit as part of the Driven to Quit Challenge.

Hosted by the Canadian Cancer Society, the Driven to Quit Challenge encourages Ontarians to quit using any tobacco products for a month.

“I am absolutely thrilled to be chosen as a winner, but becoming a non-smoker is equally exciting. The Driven to Quit Challenge gave me a starting point and additional incentive to [stay] on course,” said Perkins in a press release.

More than 36,000 contestants who enrolled in the challenge earlier this year tried to eliminate their use of all tobacco products during the month of March and had a “buddy” to keep track of their progress. The winner is chosen in a random draw, and must be tested to prove that they did indeed remain smoke-free throughout March and also during the time needed to conclude the lab results.

Since 2006, The Driven to Quit Challenge has motivated 165,000 participants to attempt quitting smoking. In the 2011 Challenge, Perkins was allowed to choose one of the two hybrid Honda’s as his grand prize while runner ups also received vacation packages and MasterCard gift cards.

Perkins chose the 2011 Insight Honda. “Congratulations to the thousands of participants, and their buddies, who have taken steps to kick this deadly addiction. … Our government is committed to helping Ontarians quit so they can enjoy healthier, more active, smoke-free lives,” said Minister of Health Promotion and Sport, Margarett Best.