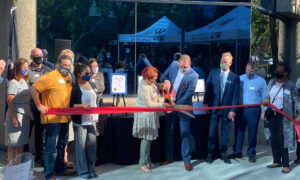 A man in a widely circulated video of the shooting of U.S. Air Force veteran Ashley Babbitt (also spelt Ashli) in the Capitol, 28-year-old Thomas Baranyi, gave a recount of what happened.

A reporter from CBS affiliate WKRG interviewed him after he stormed the Capitol with protestors and Babbitt, the woman who was shot and killed by police.

The reporter asked him how he got blood on his hand.

“We had stormed into the chambers inside and there was a young lady who rushed to the windows,” Baranyi answered. “A number of police and Secret Service were saying ‘get back, get down, get out of the way.’ She didn’t heed the call.”

NJ Advance Media confirmed Baranyi’s identity with three women who served with him in the Peace Corps in Albania as recently as last year. The outlet also confirmed with Baranyi’s father that the widely circulated video was of his son.

The reporter asked him if he needed first aid, to which he declined.

“I’m not injured. It could have been me, but she went in first. It was one of us.”

An emotional Baranyi asked the reporter to make this tragedy known.

“Just make sure people know, because this cannot stand anymore. This is wrong. They don’t represent anyone. Not Republican, Democrat, Independent, nobody. And now they’ll just, they’ll kill people,” Baranyi answered.

When asked who is he referring to, Baranyi answered: “Police, congressmen and women, they don’t care. I mean, they think we’re a joke. $2,000 checks was a joke to them. You know, there’s people filming us, laughing at us as we marched down the street at the Department of Justice. There’s a man in the window laughing at us, filming us. And here it was a joke to them until we got inside and then all of a sudden guns came out. But I mean, we’re at a point now, it can’t be allowed to stand. We have to do something, people have to do something, because this could be you or your kids.”