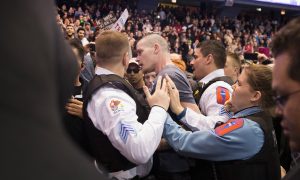 Man Who Tried to Assault Trump at Rally Had Defaced US Flag, Supports Bernie Sanders

The man who jumped over the barricades and attempted to assault Donald Trump at a rally was a student at Wright State  University, with a history of defacing the U.S. flag and tweets about supporting Bernie Sanders.

Thomas Dimassimo, 22, was charged with disorderly conduct after jumping the barricade at a Trump rally in Dayton, Ohio. He got close enough to touch the platform Trump was standing on before being escorted out of the event by the Secret Service.

A close look at the man who stormed Trump today https://t.co/0jkypWWC1u

The day before the rally, Dimassimo posted on social media that he was sick of Trump rallies and intended to “spit on their false king.”

@AJxTG this is always the goal. Unless you’re me. Then the goal is martyrdom

Dimassimo has since been released on bail, and Trump said he will personally file charged against the man.

Dimassimo has a history of left-wing activism on campus. In 2015, he led a campus protest during which the American flag was stomped on, saying that it was to protest “systematic oppression and structural inequality,” and was self-described as an ally to the Black Lives Matter movement.

Trump was nonchalant about the intrusion, stating after Dimassimo was taken away that he was “ready for him, but it’s much easier if the cops do it.”

The clash at Dayton comes less than a day after a Trump rally was cancelled in Chicago due to escalating violence from anti-Trump protesters, which Trump blamed on “organized, professionally staged wise guys.”