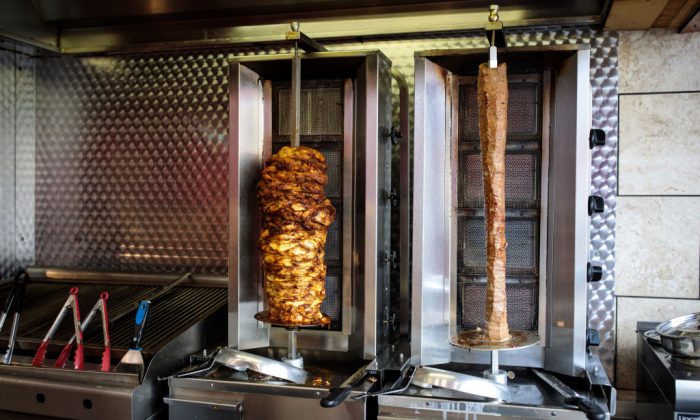 Doner kebabs sit on a rotisserie in a fast food shop in London on April 26, 2018. (Jack Taylor/Getty Images)
UK

LONDON—A man who was caught on camera throwing fast food at a homeless man has said he regrets what he did and doesn’t deserve to be criticized for his actions.

Adam Thorpe, 29, was filmed throwing his takeaway meal at the homeless man following a night out with his friends.

He saw the man asking people for money and Thorpe offered him some if he could throw the kebab and fries meal at his face.

The incident, which took place in Derby, a city in the north of the UK, in the early hours of Dec. 9, was filmed and then uploaded online, provoking widespread condemnation of Thorpe’s actions.

Britain’s Sun newspaper called him a “yob” and “heartless,” and one person who saw the footage wrote, “Why would you even do that to someone? And recording as well?”

Now Thorpe has responded, telling Metro he’s not someone who purchases food “just to throw at homeless people.”

He said, “What I did was bang out of order. I know that, but I don’t deserve the abuse I’m getting online. I’m no angel by any means, but I’m not someone who buys food just to throw at homeless people.”

He said he searched for the man the next day so he could apologize to him.

‘I Felt So Bad For What I Did’

“I felt so bad for what I did afterwards and I spent ages the next day and the day after trying to find him to say I was sorry,” he said.

“I looked all around the center of Derby trying to find him, but I couldn’t. If I thought that he was homeless, I never would have done it. I wish I could take it back.”

He said he didn’t know whether the homeless ever got the money Thorpe had promised him and that the man didn’t say anything after he threw the food in his face.

“I’ve had so many people try to point me out, but I don’t care about them. All I care about is finding the guy I did it to. It’s between me and him. What everyone is saying online, making stuff up about me, is wrong.

“If I find him or if he comes forward, I will go into my savings and buy him whatever he wants.”

The man who filmed the incident also said he regretted it, telling local British media, “I had a few drinks when someone came up to me and asked me to start recording. I didn’t know what he was going to do.

“What happened happened and I’ll admit I did laugh, but now I wish I didn’t.

“I really regret what I have done and I wish I hadn’t’ve done it. I have since deleted it off my phone because I don’t want to be attached to it.

“I want to send my apologies to the homeless man who it happened to. I don’t condone this behaviour and I would like to find him to say sorry.”