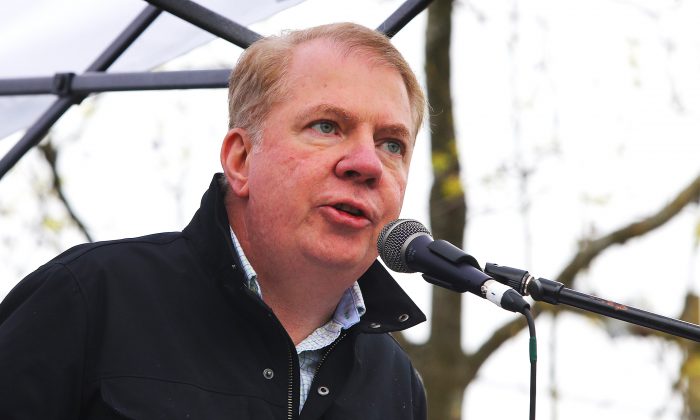 Seattle Mayor Ed Murray speaks at a rally during the March for Science in Seattle, Washington on April 22, 2017. (Karen Ducey/Getty Images)
US News

A man who accused former Seattle Mayor Ed Murray of teenage sex for hire was found dead on Friday, Feb. 16.

Delvon R. Heckard, 47, was found in a motel room in a Seattle suburb, surrounded by medication and drug paraphernalia, the Seattle Times reported.

Heckard had a history of drug addiction. He told the Seattle Times in an interview in April 2017 that both his parents had been crack addicts and that both had died of overdoses. His struggles with drug addiction were made worse by the shame he felt about being abused, allegedly, by Murray.

“I tried to commit suicide a couple of times, just because I was disgusted with myself, but I’m past that now,” Heckard told the Times.

In fact, it was the death of his father and subsequent efforts to get sober which prompted him to deal with his past and come forward with the accusation, Fox News reported.

Heckard brought a suit against then-Mayor Murray in April 2017, alleging that the politician had frequently paid him for sex during the late 80s when Heckard was a teenager.

Heckard dropped the suit, but by coming forward he had given courage to others to do the same.

Shortly afterward, three more men came forward telling similar stories, according to the Seattle Times. One of these was Murray’s former foster child, Jeff Simpson. Another was Lloyd Anderson, who had lived in the same group home as Simpson.

Finally Murray’s cousin, Joseph Dyer, publicly accused the Mayor of abusing him when he was a child.

After Murray’s resignation, Heckard refiled, this time also naming the city as a defendant and claiming that Murray had used his political influence to discredit him and others, Fox reported.