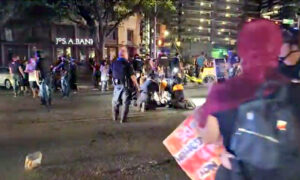 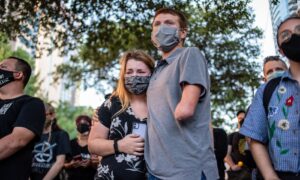 Demonstrator May Have Pointed Gun at Driver Before Being Fatally Shot: Police
0 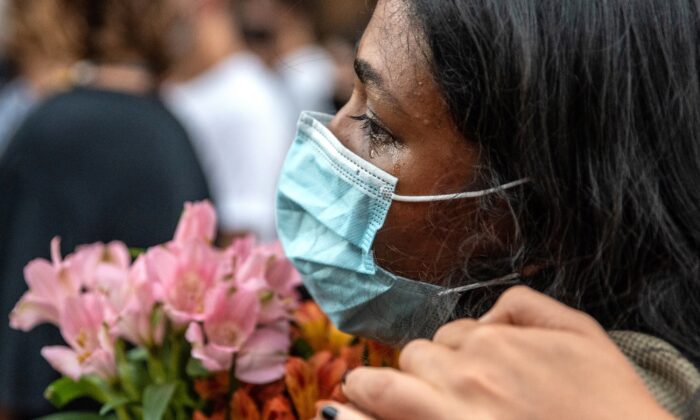 An attendee cries at a vigil for Garrett Foster in downtown Austin, Texas on July 26, 2020. (Sergio Flores/Getty Images)
Crime and Incidents

The man who fatally shot another man during a protest in Texas over the weekend said he did so in self-defense.

In a statement issued through his lawyer, Daniel Perry, an active-duty sergeant with the U.S. Army who served a tour in Afghanistan, said he was driving for a rideshare company on Saturday night in Austin to earn extra money.

After dropping a client off, Perry piloted his vehicle onto Congress Avenue and encountered the protest, which was blocking the road. Perry was unaware of the demonstration before encountering the group, his lawyer, Clint Broden with Broden & Mickelsen, said.

“When Sgt. Perry turned on the Congress Avenue, several people started beating on his vehicle,” the statement said. “An individual carrying an assault rifle, now known to be Garrett Foster, quickly approached the car and then motioned with the assault rifle for Mr. Perry to lower his window.”

Because Perry thought Foster was with law enforcement, he complied. But it soon became apparent to Perry that he was wrong.

“It has now been confirmed by several witnesses that this individual with the assault rifle then began to raise the assault rifle toward Sgt. Perry,” his lawyer said. “It was only then that Sgt. Perry, who carried a handgun in his car for his own protection while driving strangers in the ride share program, fired on the person to protect his own life.”

Right after Perry shot Foster, another person in the crowd began firing on Perry’s vehicle. Perry sped away before calling the police after reaching a safe place.

Perry “is devastated by what happened” but correctly responded to what he “reasonably perceived” as a threat to his life, his lawyer said.

“We simply ask that anybody who might want to criticize Sgt. Perry’s actions picture themselves trapped in a car as a masked stranger raises an assault rifle in their direction and reflect upon what they might have done if faced with the split second decision faced by Sgt. Perry that evening.”

Austin Police Chief Brian Manley told reporters after the shooting that Foster may have pointed his gun at Perry. People on the scene gave “several different versions of the incident,” Manley said.

Both the driver and the man who shot at him from the crowd were detained and questioned before being released.

Their guns, as well as Foster’s rifle, were seized as evidence, as was Perry’s vehicle.

Several witnesses blamed the driver for the shooting.

“I want to be very clear that the driver incited the violence. He accelerated into the crowd of people and he shot first,” James Sasinowski told CNN.

On Thursday, the Austin Police Department said its homicide unit is still probing the case.

Detectives are working to gather as many witness statements, videos, and photographs as possible in order to understand what happened. Anyone in the immediate area with material or accounts is being asked to contact police or Crime Stoppers. Detectives are still canvassing businesses in the area, seeking surveillance camera footage.

“In addition, there are rumors circulating about the identity of those involved. What we can definitively say is that no one involved in this case has any connection to law enforcement agencies,” the department said in a statement, declining to confirm Perry’s name because of potential legal ramifications.

According to social media accounts reviewed by JJ MacNab, a fellow at George Washington University’s Program on Extremism, Foster sympathized with the Boogaloo movement, which is described by some as anti-government and others as pro-freedom.

Foster’s activity included posts in favor of blinding police officers and he was a member of some private Boogaloo groups on Facebook.

Contrary to the perception of some, it is possible to support the movement and Black Lives Matter, McNab said, referring to a recent rally in Virginia that featured activists from both groups.

Foster told independent reporter Hiram Gilberto before he was shot that he was carrying a weapon because “they don’t let us march in the streets anymore, so I gotta practice some of our rights.”

He said he wouldn’t use his gun against the police before adding: “I think all the people that hate us and wanna say [expletive] to us are too big of [expletive] to stop and actually do anything about it,” he added.

“He was looking for confrontation and he found it,” he wrote on social media.

Casady issued an apology this week to Foster’s fiance and family for what he called an “insensitive” post.

“I apologize for my offensive choice of words. I should have known better. I have responded to dozens of shootings in my law enforcement career and they are all tragic. I ask that Garret’s [sic] family and friends accept my apology,” he wrote in a statement.

Experts aren’t sure whether Perry will be charged, referring to state law.

“Under Texas law about the only thing you have to do is show you had a right to be present at a particular place with your gun, and then that you felt reasonably threatened,” attorney Milo Colton, a criminal law professor at St. Mary’s University in San Antonio, told Spectrum News.

“If he’s frightened, you’re going to have a guy pulling a gun and shooting. We’ve had people shoot for a lot less here in the state of Texas.”

Jennifer Laurin, a professor of criminal law and procedure at the University of Texas, said Perry driving his vehicle into the crowd might open him up to charges.

A person “forfeits their right to use deadly force justifiably if they are the provoker of the situation,” she told the Statesman, adding: “If it’s a situation in which the driver of a vehicle turned their vehicle into a deadly weapon, that itself might have justified someone actually threatening deadly force against that driver.”