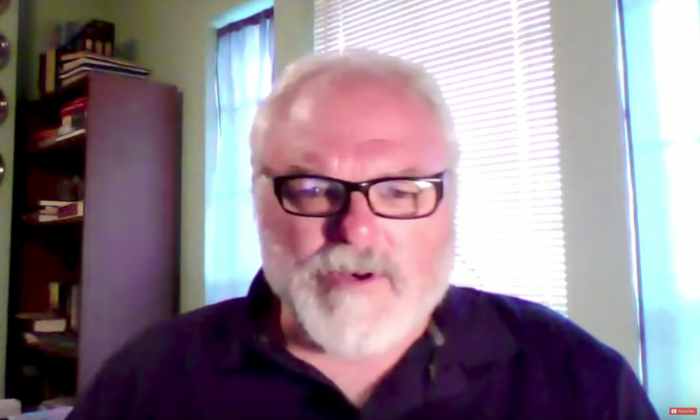 Willeford spoke to Steven Crowder from Louder With Crowder, from his home on the morning of Sunday, Nov. 5, and gave a personal account of what went happened that day.

Willeford told Crowder that at first, he said he heard “what sounded like tapping on my window.” When his oldest daughter told him she thought she heard shooting he followed her to the kitchen where he could clearly hear the sound of gunfire.

While Willeford went to his gun safe to retrieve his AR-15 rifle, his daughter got into her car and drove around the block. She returned and told him, “Dad, there’s someone in black tactical gear shooting at the Baptists church.”

“I opened the box of ammunition and I grabbed a handful because I was hearing shots, one after another, rapid pace,” Willeford said.

Willeford said he ran the block to the church barefoot.

When Willeford ran up to the church, the first thing he saw was a gray SUV parked in the middle of the road with the door open. Then he saw the shooter.

“I saw the shooter come from around the front of the vehicle. At this time he had a handgun in his hand,” he said. “He had a tactical helmet on, like a SWAT team would use, with a black visor, and he had a Kevlar vest and you could tell it was a bulletproof vest.” The shooter was about 20 yards away, Willeford said.

“I’m a Christian,” Willeford stated. “And maybe this sounds a little [odd to] some of your viewers that aren’t Christian, but I believe the Holy Spirit was on me, because I had the presence of mind to look at what was going on.”

Even though the gunman was firing a pistol at him, Willeford was able to focus on the important details of the situation.

“As we exchanged fire I noticed that the side was one of those tactical vest that velcros across,” meaning, the sides offered no protection, he said. “I shot between the two Kevlar plates.”

Willeford is a skilled shooter who had been an NRA-certified firearms instructor. He taught his children to use guns safely and all of them had earned the rank of NRA Distinguished Expert—the top ranking of the Winchester/NRA Marksmanship Qualification Program.

Willeford said the gunman got into the gray SUV and fired twice though the window. Willeford fired back, “and at this point I was shooting where his head would be,” he explained.

Willeford took a final shot, which shattered the SUV’s rear window as the gunman drove at high speed down Highway 539.

As the shooter fled, Willeford flagged down a passing pick-up truck and jumped inside. The driver had witnessed the entire gunfight. Willeford told the driver “That guy just shot up the Baptist Church and we’ve got to stop him,” according to 40/29 News.

The pair then set off at high speed after the shooter’s vehicle.

After several miles of pursuit at speeds of up to 95 mph, the gunman’s vehicle swerved off the road, rolled back on, hit a highway sign, and then went into a ditch.

Willeford kept his gun trained on the shooter’s car until the police arrived a few minutes later.

‘Good Guy With a Gun’ Possibly Saved a Lot of Lives

“I found out later he had multiple firearms in the vehicle and lots of ammunition,” Willeford told Louder With Crowder. “I don’t know what his plan was, but my thought in looking at it is he had a full tactical helmet and a Kevlar vest—he wasn’t through.

“And there was the River Oaks Baptist Church two miles down the road in the same direction that he left,” he added. “I am by no means saying that that is where he was going, but they were in the middle of Sunday morning services, too.”

Willeford continued to say that even if the shooting at the church was over, “there was going to be a shootout with police at some point. I stopped that also.”

Upset, Angry and Hoping for Healing for His Town

Despite knowing that he might have saved dozens of people from a similarly grim fate, Willeford said he hadn’t unraveled how he felt about what he had gone through.

“I’m having all kinds of issues,” he said.” I know police officers go some sort of counseling and I probably need to talk to a counselor, and I’m going to, because I can’t put my finger on what my feelings are.”

“I’m a little bit angry at the media,” he said. “My issue is I feel like a prisoner in my own home because I can’t step out my door.”

“This is crazy, crazy. They’re coming up to my door, and they’re sticking cards in my door,” he said. “Sheriff Joe Tackitt told them if they come up into my yard again, the was going to arrest them, and when he left, they were right back.”

Willeford said he wasn’t going to be able to attend the memorial service at the local baseball field because the media would be there.

“I want to hug some of these people,” he said, on the edge of tears. “I don’t even know which ones of my friends made it and didn’t, I don’t know—because the media is not giving me any information, and they’re keeping me form seeing any of these people.”

Willeford said he didn’t want the media focusing on him.

Willeford said he hoped that since he had finally done an interview, that the media would “go away.”

He said he hoped the media would “get out from in front of my home and focus on what should be focused on—helping the community however they can.”