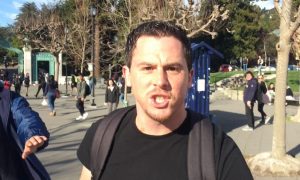 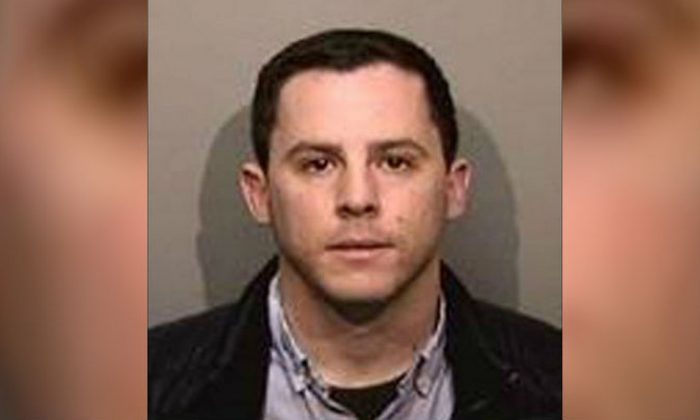 The man accused of assaulting a conservative activist at the University of California–Berkeley has been charged with three felonies and a misdemeanor, according to Alameda Superior Court online records.

Zachary Greenberg, 28, was charged March 5 with assault “likely to produce great bodily injury,” battery with serious bodily injury, criminal threats, and the misdemeanor—vandalism with damage of less than $400.

On March 1, campus police booked Greenberg into jail after he was believed to be the man who was caught on camera punching conservative activist Hayden Williams on the university’s campus on Feb. 19.

Greenberg allegedly hit Williams multiple times, including one punch directly in the face, which was caught on video and widely circulated online.

Greenberg wasn’t in custody as of March 6; his arraignment was scheduled for 9 a.m. that day at the Wiley W. Manuel Courthouse, online records show.

The incident happened when Williams was manning a table recruiting for Turning Point USA (TPUSA), a conservative student organization that operates on 1,400 campuses.

At some point, Williams was approached by two men who verbally accosted him. He said he started to record the men with his phone about six to seven seconds into the confrontation.

One of the men, alleged to be Greenberg, knocked the phone from his hand. Williams picked up the phone and continued recording. The man started to shove and drag him. “You want to hit me? I’m going to shoot your [expletive],” he said at one point. Finally, after hurling several more curses and insults, he punched Williams in the face and promptly left, leaving Williams with a badly swollen eye.

Williams said his approach to the incident, such as recording it, followed some recommendations of the Leadership Institute.

“That’s really the only way we can hold these people accountable, is by first and foremost, is documenting these incidents as they happen,” Williams told Fox News. “And that’s really one thing we teach at Leadership Institute, is just try and record everything, and don’t retaliate, because the left will use anything they can to try to distort the facts.”

Williams’s attorney, Harmeet Dhillon, said she was pleased to see progress in the case, though she pointed to a previous case of 2017, when Eric Clanton, a former community college professor, hit a Trump supporter on the head with a bike lock during a rally at the campus. The Alameda County District Attorney’s office let Clanton off with three years of probation.

“We’re happy that the authorities seem to be taking this seriously, but we’ll suspend judgment on how seriously until we see the resolution of this case,” Dhillon said.

She called the attack “the very epitome of fascism, the use of violence to silence your opponents and making people afraid of expressing their views.”

During the annual CPAC conference on March 2, Trump brought Williams on stage, saying, “he took a hard punch in the face for all of us.”

Williams said many students across the country face attacks and intimidation if they express their conservative values or support for the president.

“These students do it because they have a love of our nation and freedom and, frankly, a love for you, Mr. President,” he said. “So, if you keep defending us, we’ll keep defending you.”

Trump recommended that Williams sue Greenberg, the university, “and maybe sue the state.”

In response to the Feb. 19 incident, university officials repeatedly condemned the attack and pledged commitment to free speech.

“We readily admit that this university … is unable to prevent a lone bad actor who was neither employee or student from engaging in reprehensible behavior on a campus spanning 1,200 acres and a population of 50,000 people,” Berkeley spokesman Dan Mogulof said in a March 2 release.

“We don’t see a way to do that, but that doesn’t mean our police force and the administration don’t awaken every morning trying their best to deter criminal behavior and keep our campus safe.”

The university was forced to step up its efforts to protect free speech after a national outcry over how it handled disruptions of prominent conservative speakers on campus, including protests and riots by far-left groups that had ramped up since the 2016 elections.

Mogulof said that in 2018, the university spent more than $4 million “to ensure that our conservative students could safely and successfully hold events on campus and invite speakers of their choice to these events.”

“Not a single disruption. No opposition. No protest. No [media] coverage,” he said.