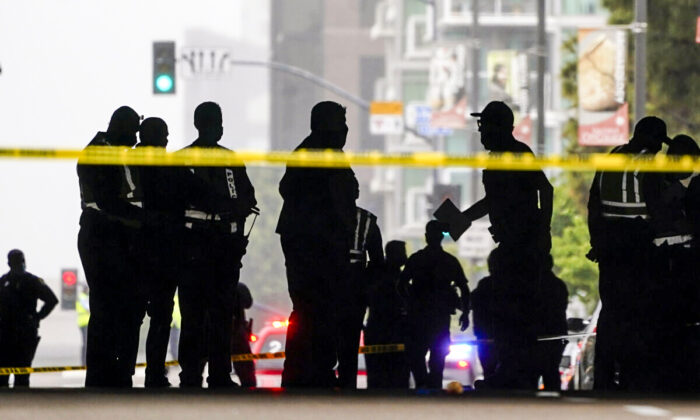 In this file photo, emergency crews work at the scene of an accident, in San Diego on March 15, 2021. (Gregory Bull/AP Photo)
Southern California

Man Who Opened Fire on Restaurant Got 49 Years in Prison

SAN DIEGO—A man who opened fire into a Hillcrest restaurant with an assault rifle, but missed about a dozen people inside the eatery, was sentenced Friday to 49 years in state prison.

Stefano Markell Parker, 32, pleaded guilty last year to five counts of assault with a semi-automatic firearm in connection with the Feb. 12, 2019, shooting at The Asian Bistro on University Avenue.

San Diego police said Parker opened fire from the street at about 7:40 p.m., sending patrons inside the restaurant ducking for cover. None of the people inside was struck by gunfire.

Parker fled the scene but was arrested a short time later in an alley on Fourth Avenue, according to police, who said the rifle used in the shooting was located nearby.

Police and prosecutors have not disclosed a motive for the attack.

The discovery of a homophobic social media post from Parker, as well as the shooting’s location in Hillcrest, led investigators and city leaders to suspect a potential anti-LGBTQ motivation.

However, Parker was not charged with hate-crime allegations in connection with the shooting.

A few months after the shooting, Parker was found mentally incompetent to stand trial in the case and was sent to Patton State Hospital on at least one occasion for treatment.

Prior to imposing the 49-year sentence, San Diego Superior Court Judge Frederick Link said he believed that prior to coming to California, Parker did not get the treatment he should have received.

“He committed a very serious crime. He endangered a lot of people. Thank God that nobody was injured,” Link said.

Parker’s pleas also came with an admission that he has a 2006 murder conviction out of Alabama, when he was a juvenile. He was sentenced to 20 years in that case, but served just four.