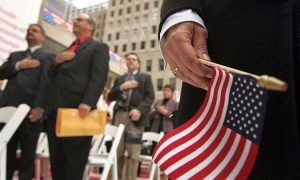 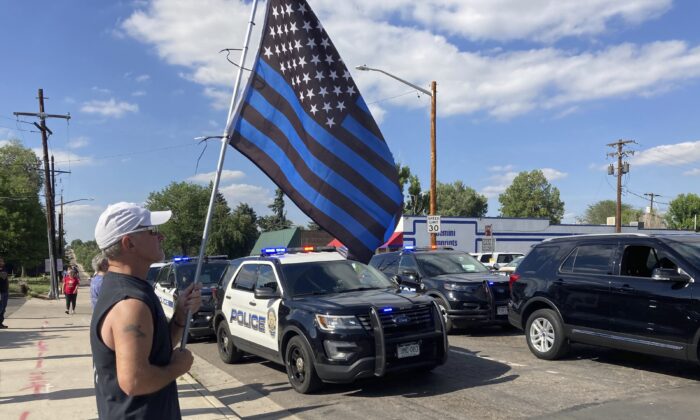 John Garrod, of Arvada, stands holding a blue line flag at the beginning of a line of about 30 police cars lined up for a procession in honor of the officer who was fatally shot in Arvada, Colo., on June 21, 2021. (Colleen Slevin/AP Photo)
Crime and Incidents

The Colorado man who police called a hero for having shot and killed a suspected gunman during an incident last week was killed by police while holding the suspect’s rifle, officials said.

The Arvada Police Department said that a responding officer fatally shot Hurley—the man they called a hero—after he saw Hurley holding an AR-15.

The department released a lengthy timeline detailing the series of events that took place in Olde Town Arvada, a historic shopping district with shops, restaurants, breweries, and other businesses.

According to the timeline, Beesley was dispatched to Olde Town Square around 1:30 p.m. on the day in response to a suspicious person call. The suspect, Troyke, pulled into the area with his truck, left the vehicle holding a shotgun, and ran after Beesley, reportedly yelling at him. Beesley was walking toward Olde Town Square.

Immediately after Beesley turned around, Troyke shot him twice, killing him. The incident is shown in a video released by the police department.

Troyke then returned to his truck and retrieved an AR-15, then ran back toward the Olde Town Square, where Hurley confronted him and shot him with a handgun.

When another officer arrived, Hurley was reportedly seen holding Troyke’s AR-15, and the responding officer shot at Hurley, killing him, police said. Hurley’s shooting of Troyke and the officer’s shooting of Hurley aren’t shown on the video.

Previously, police hadn’t announced who had shot Hurley or Troyke.

Police Chief Link Strate described Hurley as a hero and said that his actions potentially saved lives. He said that Hurley’s death by a responding officer was “equally tragic” to Beesley’s killing.

“The threat to our officers and our community was stopped by a hero named Johnny Hurley,” he said. “Johnny’s actions can only be described as decisive, courageous, and effective in stopping further loss of life.”

“It is clear that he intervened in an active shooting that unfolded quickly in a busy commercial area in the middle of the day, and that he did so without hesitation,” the department said. “Mr. Hurley’s actions certainly saved others from serious injury or death.”

The department added that “it is clear that the suspect bears responsibility for this tragic sequence of events.”

The deaths of Beesley and Hurley are being investigated separately. Arvada police are handling the probe into Beesley’s death. Meanwhile, Hurley’s death will be investigated by a multi-agency Critical Incident Response Team, as mandated by Colorado law.

That officer has been placed on administrative leave pending the investigation.

Police previously said that Beesley was targeted because he was an Arvada police officer. In its statement, Arvada police said that its investigators recovered a document purportedly written by Troyke that contained at least six statements hateful of law enforcement officers.

One of the statements read, “Today I will kill as many Arvada officers as I possibly can.” Another statement read, “I just hope I don’t die without killing any of you [expletive].” Troyke then goes on to say that this is his way of holding law enforcement accountable, according to the Arvada police statement.

About 40 minutes before the shootings, Troyke’s brother called police asking for them to check on him because he said his brother was going to “do something crazy.” Beesley and another officer tried to find Troyke at his home near downtown but were unable to, police said.

A teenager then called police to report a suspicious person—an older man who walked up and made a weird noise, among other actions. This was the call Beesley was responding to when he was shot and killed.

The shooting incident on June 21 comes after a shooting incident in March in Boulder—about 20 miles northwest of Arvada. The shooter opened fire, hitting 10 people, including a police officer. The suspect, Ahmad Al Aliwi Alissa, made his second court appearance in late May. A September hearing has been scheduled to review evidence in that case.