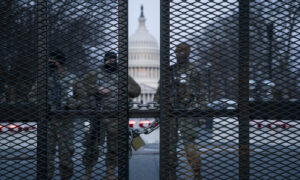 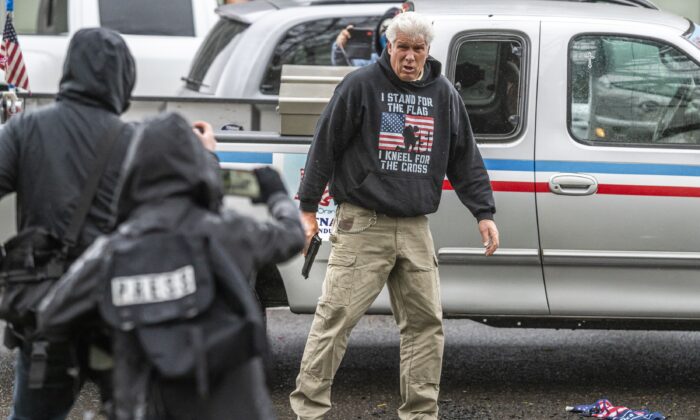 A driver pulls a handgun at Antifa members after they smashed his truck lights, in Salem, Ore., on March 28, 2021. (Nathan Howard/Getty Images)
Crime and Incidents

Man Who Displayed Gun at Antifa Protest Was a Victim, Police Say

A man who displayed a handgun in Oregon on Sunday was a victim of the extremists who had gathered outside the state Capitol, law enforcement clarified in a new statement.

Heavily armed members of the far-left, anarcho-communist Antifa network traveled to Salem and accosted drivers who were flying pro-Trump and pro-law enforcement flags. Video footage and photographs showed them pepper spraying a driver’s face and lobbing a rock directly at another.

At one point, a driver exited his vehicle and displayed a firearm.

That driver was briefly detained but not charged, Oregon State Police said in a statement on Monday.

The man, who has a valid concealed handgun license, was detained and interviewed before being released.

Reports of crimes will be forwarded to the Marion County District Attorney’s Office for review.

According to Antifa expert Andy Ngo, two of those arrested are regularly seen at far-left gatherings in the Pacific Northwest. A third man, Anthony Martinez, has written for the Teen Vogue publication in the past. The article identified him as a youth leader at Latinos Unidos Siempre.

The skirmishes took place outside the state Capitol. Antifa members gathered in response to a planned event dubbed the Freedom Rally.

Approximately 100 individuals wearing garb favored by Antifa, including black clothing and ballistic vests, arrived on the Capitol mall grounds just before noon, according to the Salem Police Department.

Shortly after they arrived, police began receiving reports that the mob was targeting vehicles driving by, with victims reporting their cars and trucks were damaged by balloons that were filled with paint, rocks, and other hard objects. One vehicle was significantly damaged when someone hurled a tree limb through the front window into the vehicle’s passenger seat.

Officers closed the street where the chaos was unfolding but the crowd dispersed to nearby streets to continue committing crimes.

The planned Freedom Rally did not take place because of the closure. The vehicles flying U.S. flags, pro-Trump flags, and other flags appeared to be part of the rally.

Members of the crowd assaulting the vehicles flew Antifa flags and Antifa groups had promoted the gathering, dubbing it “Fascist Free 503.”

Antifa stands for antifascist. Members of the network regularly resort to violence.