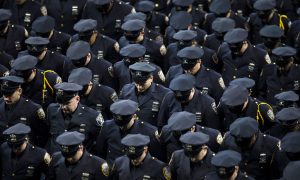 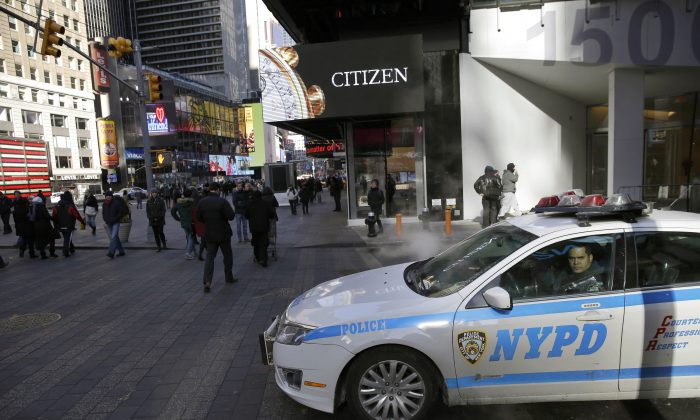 A policeman looks out the window of his patrol car in Times Square in New York. (AP Photo/Seth Wenig)
New York

Man Who Declared It ‘Easy’ to Kill Cops Arrested

The following was an email sent to media by the NYPD.

Watchful NYPD patrol officers, on heightened alert in the wake of recent terror attacks on authorities in New York, Canada, Australia and France, arrested a 32-year-old Brooklyn man on Tuesday night after he demonstrated to friends “how easy it would be to shoot a police officer.”

Two uniformed cops in a marked NYPD police car were stopped at a red light on West 125th Street and 7th Avenue in Harlem just before 9 p.m. when a sport-utility vehicle also heading westbound slowed to a stop next to them in the lane to their right.

But the green 2005 Chevrolet TrailBlazer didn’t pull fully alongside the idling police car. Instead, it stopped just short, at the rear of the passenger’s side, prompting the cop at the wheel to look back over his shoulder.

And what the 26-year-old officer saw horrified him.

The Chevy’s driver had his arms extended before him, both hands clasped around an object that appeared to be a weapon, and was pointing it at the head of the cop closest to him in the police car’s front passenger seat.

And then, in an instant, he twice made a shooting motion with the object before the traffic light turned to green and he drove away.

“I absolutely thought we were dead,” said the cop in the driver’s seat, a former member of the NYPD’s Cadet Corps while he was a college student, who now has almost three years on the job as a full-fledged police officer.

In the dark, cold night the cops quickly pulled over the SUV, a vehicle with a Pennsylvania license plate registered to an energy sales company that solicits clients to switch providers. Including the driver, there were seven people inside, all co-workers about to be dropped off at various locations.

When police asked the driver, Unique Johnson, what he was thinking, he said he told one of his work cohorts how easy he thought it would be to shoot an on-duty cop, before he simulated a firearm by pulling out his Apple iPhone, clad in a deep-blue protective cover.

“I then put the cell phone and pointed like a gun, as if I was shooting a police officer at an angle,” Johnson told investigators.

Johnson was arrested and charged with Menacing a Police Officer, Harassment, Disorderly Conduct, and Aggravated Unlicensed Operator for driving with a suspended license. In October, he was arrested in Brooklyn after talking on his cell phone while operating another van for the same sales company.

On Tuesday evening he was awaiting arraignment at Manhattan Criminal Court.

“Here you have two officers who showed tremendous restraint in this situation,” said one of the detectives who debriefed Johnson and his passengers. “God bless them.”

The NYPD – already hyper-aware after a group of four uniformed officers was savagely attacked in Queens by a hatchet-wielding man who had visited hundreds of jihadist-related web sites just prior to the act, and after Police Officers Wenjian Liu and Rafael Ramos were shot to death in their patrol car in Brooklyn – have since investigated 126 threats to police in New York City.

The threats, delivered in person, by telephone and on social media sites, have results in nearly 30 arrests. Eighty-five of the cases have been closed in some fashion while 41 others remain open and active.

And earlier this week cops were alerted to a fresh terror threat put out on Twitter by ISIL, also known as “Islamic State,” a Syrian-based organization with a growing number of so-called homegrown adherents.

In the video, a re-release of a September message, terrorists urged supporters to “rise up and kill intelligence officers, police officers, soldiers, and civilians.”

The threat was specifically issued against the United States, Canada, France and Australia.