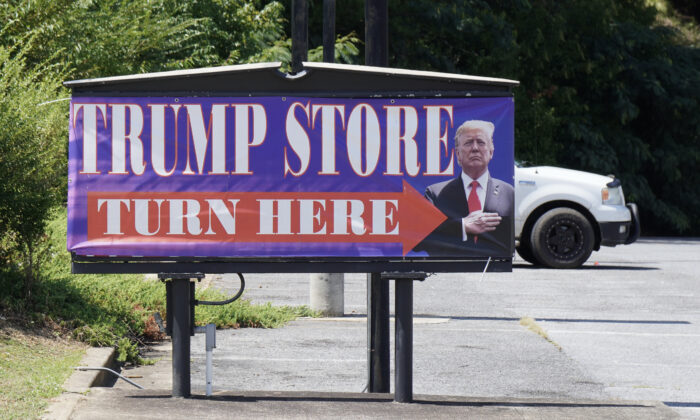 An anti-Trumper who allegedly crashed his car into a New England For Trump store over the weekend has the logo of the hard core Pro-Antifa band Ministry tattooed on his arm.

Sean Flaherty, a 46-year-old father from Raynham, Massachusetts, also has an anti-Trump bumper sticker on the 2015 Volkswagen Jetta that video shows he drove into the store in Easton in the southeast of the state.

Flaherty, who was charged with reckless operation of a motor vehicle and malicious destruction of property, could not be reached for comment by The Epoch Times. No date for a hearing has yet been set in the Taunton District Court.

A video of the crash shows Flaherty circling the store and then accelerating towards it, smashing his car through its front and narrowly missing an employee—an American veteran—before stopping just before the back wall.

What made matters worse for storeowner Keith Lambert, he said in an interview with The Epoch Times, was that he has received emails from supporters of Flaherty wishing for more violence against his store.

“You’re a [expletive] cancer. All of you. The driver had a great idea,” read one of the emails Lambert shared with The Epoch Times.

Another person posted on Facebook “not all heroes wear capes,” in referring to Flaherty.

In addition to the New England For Trump store, Lambert owns several Let’s Go Brandon stores around New England, including three in Massachusetts, one in Rhode Island, and one in New Hampshire.

Merchandise sold by the store includes “Trump Won” T-shirts, mugs celebrating the Second Amendment, and a variety of bumper stickers.

Lambert, who has had signs broken and stolen and his store vandalized with graffiti, emphasized that he also received a groundswell of support, but was disgusted that anyone would celebrate such violence.

“There’s just really some hateful, evil people in this world. It’s scary,” said Lambert, who estimates he suffered about $40,000 in damage from the crash.

Patty Locke, chairwoman of the Easton Republican Committee, told The Epoch Times that she sees the media’s coverage of the incident as a primary example of the double standards it practices when it covers what it perceives as political violence.

Referring first to the recent tragic Uvalde shooting, Locke said the media was quick to use the incident as a means to promote gun control, even though it was clear that the shooter suffered from severe mental illness.

She also pointed to the contrasting coverage of the recent firebombings of pregnancy centers by pro-abortionists and the lack of outrage from the media over the killing of Ashli Babbitt, the Jan. 6 protester fatally shot by a Capitol police officer.

“When it comes to conservatives, they will spin a story negative any way they can against them; they don’t waste a second to blame it on Republicans and label them as bad people,” said Locke.

Some media reported on Flaherty’s injuries following the crash and didn’t initially use his name in any of its reports until Turtle Boy, a popular blogger among Massachusetts conservatives, called them out for withholding it.

According to Lambert his store clerk told him that Flaherty allegedly said he was undergoing shock treatment and that he heard voices in his head.

There were no initial reports of Flaherty’s anti-Trump bumper sticker, even though it is visible in the video.

The sticker depicts a picture of Trump made to look like Hitler with the slogan “those that make us believe absurdities, make us commit atrocities.”

Media also did not report on his ties to the metal rock band Ministry.

A Facebook picture of Flaherty shows him brandishing the same symbol pictured at the beginning of a music video of the band’s song “Antifa,” a violent anti-Republican song with lyrics that include “we are the Antifa, right wing is in freefall, they won’t survive … Antifa is coming for you,” and “I’ll back it up with my fist, sick and tired of dealing with [expletive], that’s why I resist.”

An introduction to the song refers to all people who voted Trump into office as Nazis.

Lambert, the son of a U.S. Navy veteran and grandson of an U.S. Army veteran, pointed out that the majority of his employees are former military service people.

The store clerk nearly run down by Flaherty is a U.S. Navy veteran who served in Vietnam.

The video of the crash shows that after the clerk consoled Flaherty and stayed with him waiting for an ambulance to come, he went outside and picked up a large American flag swept outside by the force of the crash.

Locke said the image brought tears to her eyes.

“And yet they are calling this crazy person who could have killed someone, the hero,” she said.