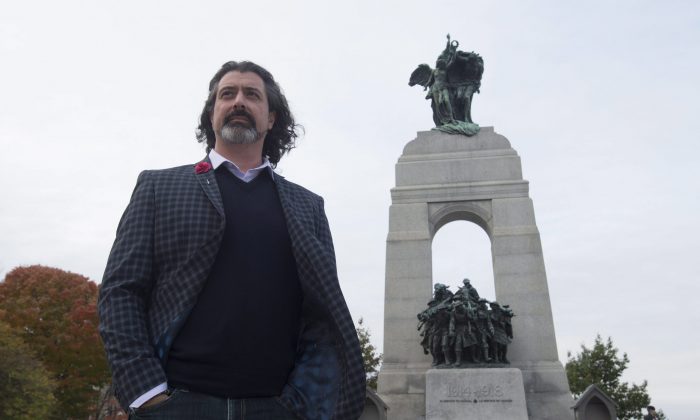 Martin Magnan poses for a photo in front of the National War Memorial in Ottawa on Oct. 21, 2015. Magnan was among six people who risked their lives to aid mortally wounded soldier Cpl. Nathan Cirillo, who was shot by Michael Zehaf Bibeau last October. (The Canadian Press/Adrian Wyld)
Canada

The experience 'has given me a great deal of compassion,' says Martin Magnan
By The Canadian Press

OTTAWA—The violence Michael Zehaf Bibeau visited upon an unsuspecting Ottawa one year ago not only killed Cpl. Nathan Cirillo, but irrevocably altered the way Martin Magnan looks at his own life and the people around him.

A year ago, he was a well-regarded media adviser at National Defence on his way to a meeting when Zehaf Bibeau popped out from behind the National War Memorial to gun down Cirillo before storming Parliament Hill.

Magnan was among six people who risked their own lives to aid the mortally wounded soldier. They were a mixture of civilian and military—a trauma nurse, a former battle group commander in Afghanistan, and the driver for the country’s chief of defence staff.

It was Magnan who held Cirillo’s hand as the young soldier died.

“You know, I have children,” he said Wednesday, Oct. 21, in an interview with The Canadian Press.

“I was really thinking at that point, as I grabbed his hand, that if anything like this ever happened to any of my children I’d really hope a stranger would hold their hand as they went through to the other side.”

Although, paramedics arrived and continued CPR, Magnan said it was evident to him and some of the other rescuers that Cirillo’s wounds were too severe and that he had passed away at the foot of the soaring granite monument.

This experience has changed me. I do believe I’m a better person because of it.
— Martin Magnan

He sat on the edge of the Tomb of the Unknown Soldier as the young reservist was taken away to the ambulance, and remembers looking up at the bronze faces of the soldiers represented in the memorial.

“I see them cart away Nathan and people are kind of dispersing,” Magnan said. “There’s bags on the ground. And then, my hands are shaking. I’m getting kind of cold and I just look up at the stone face. And I look up higher and see the tip of the statue. That was probably the coldest, loneliest moment of my life.”

Everyone who came to Cirillo’s aid was taken to the Ottawa police station for an interview; Magnan was among the last of the initial six to be questioned. As he was leaving, witnesses from the shooting on the Hill itself were lining up for questioning and that’s when the enormity of the day’s events settled on him.

“I had no idea who these people were, and they were all talking about the shooting at Parliament,” he said.

“At that point, I’m like, ‘Wow, that’s where he went. That’s what happened next.’ It was a second overwhelming wave because you realize this was an attack on government. This really happened.”

The events of that traumatic day still live with him. Magnan, who went on to be press secretary to the outgoing veterans minister, Erin O’Toole, says the shooting has given him a much keener appreciation of what soldiers go through when they lose a friend.

Five of the six strangers who tended to Cirillo went to his funeral in Hamilton, Ont., and have bonded over their collective experience.

Although he thinks about Cirillo often, it has been the return of the cool fall air and the falling leaves that have brought the memories crashing back.

“I do think about it regularly, but it’s like thinking about a relative” who has died, he said. “Not in a bad way at all. This experience has changed me. I do believe I’m a better person because of it. It has given me a great deal of compassion.”

He respected veterans with post-traumatic stress before, “but now I have an overwhelming amount of time for these people and their experiences” and that has made him a better person, Magnan said.

In the wake of the attack, Magnan was standing on the windswept square a few days before the ceremonial guard was to resume its duties when a total stranger recognized him and expressed her appreciation.

“I didn’t know what to do,” said Magnan, who is clearly uncomfortable with being called a hero.

“I don’t think I thanked her enough because it was big of her to do that. I don’t know why I did it. … A complete stranger walked up and said thank you to me for something that I didn’t choose to do. I just did it.”