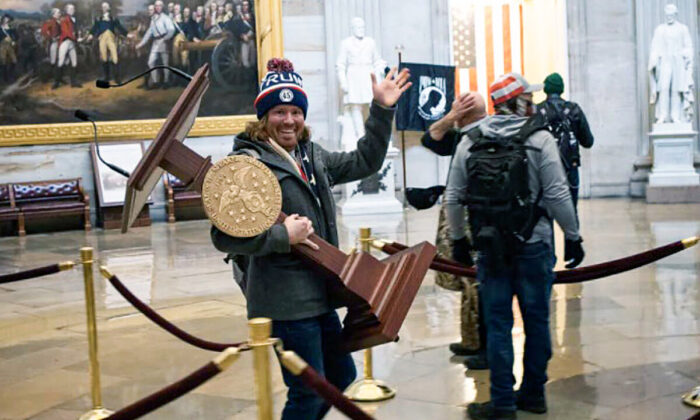 The Florida man who said he “broke the internet” when photographed carrying House Speaker Nancy Pelosi’s lectern at the U.S. Capitol on Jan. 6, 2021, was sentenced Friday to 75 days in jail, a $5,000 fine, and a year of supervised release.

Adam Christian Johnson, 37, of Parrish, Fla., was sentenced by U.S. District Senior Judge Reggie B. Walton on one count of entering or remaining in a restricted building or grounds, a Class A federal misdemeanor. As part of a plea agreement, two other charges were dismissed.

The stay-at-home father of five children will be allowed to serve the jail sentence at a facility nearest to his home so his children can visit, Judge Walton ruled. With credit for time served, Johnson faces another 60 days in jail. He was free on personal recognizance at the time of sentencing.

“I do consider this to be a very serious offense,” the judge said at the Washington D.C. federal courthouse. “It’s one of the darkest days, I think unfortunately, that this country has ever suffered. … It’s a slippery slope from what happened on that day to what may happen the next time around. I just hope it’s not the case, but the precedent has been set.”

Suggested Bust of Washington as a Battering Ram

Johnson attended President Donald J. Trump’s speech at the Ellipse on Jan. 6. Prosecutors allege that Johnson ran to the Capitol when he heard rioters had breached police lines.

Johnson was outside the entrance to the House of Representatives as rioters tried to break through the doors. On the other side of the barricaded door stood three plainclothes law enforcement officers with their handguns trained on the broken windows in the doors.

“He was undeterred by his fellow rioters’ attempts to break down the doors to the House Chamber, where Johnson believed members of Congress were still counting votes,” prosecutors said in a sentencing memorandum. “Indeed, he stood by for over ten minutes watching their efforts and even encouraged them to use a bust of George Washington to smash the House doors open.”

Prosecutors said Johnson looked at a bronze bust of President George Washington near the doors and remarked that it would be “a great battering ram.” He did not commit any violent acts or damage property, but he did pick up Speaker Pelosi’s lectern near a spiral staircase, carried it into the Rotunda and posed for pictures. He left the lectern in the Capitol.

“He bragged that he ‘broke the internet’ and was ‘finally famous,’ presumably in reference to the photo of himself carrying the lectern that went viral,” the government’s sentencing memo said.

A “substantial aggravating factor” in the case, prosecutors said, was the fact that Johnson deleted most of the content on his phone on Jan. 7. Johnson said he began receiving death threats at that time. Part of the motivation to delete information was out of fear for his life, he told Judge Walton.

“There were things there that happened that should never happen again, and I am ashamed to have been a part of it,” Johnson said.

Johnson denied the judge’s suggestion that if he had found the door to Pelosi’s office open, he would have harmed the Speaker. “I’ve been asked, ‘What would you have (done) if you did find her,” Jones said. “I don’t know, probably ask for a photo with her.”

Prosecutors, noting Johnson is a stay-at-home dad whose wife works as a physician, wrote that “their financial situation is so favorable that Johnson has not had to work for the past 11 years.”

Defense attorney Dan Eckhart took umbrage at the notion stay-at-home parents don’t work, or that Johnson “is an entitled or privileged person and he hadn’t worked for 11 years.”

“Nothing could be farther from the truth,” Eckhart said. Johnson was a nearly 4.0 grade-point-average student at the University of South Florida in pre-med studies. “So Mr. Johnson decided to give everything up, gave up his whole career. …Instead of going to med school, being a doctor, he’s a stay-at-home dad.”

Judge Walton did not agree with the government’s assessment. “I respect a man who forsakes his career to raise his children. I’ve no problem with that,” he said. “I think that’s a great thing. Five boys, I know it’s a hard job.

“A lot of people think a parent … staying at home taking care of kids is an easy job,” the judge said. “I know it’s not, so I commend you for that.”

However, as a father Johnson should have thought about what kind of example he set for his boys on Jan. 6, Judge Walton said.

“It’s mind-boggling to me how somebody who has that responsibility and has what is purported the intellectual capacity you have, to find yourself coming all the way up here to Washington to do something like you did,” Walton said.

Johnson said he talked to his children about what occurred. “The night I was taken into custody to serve my time in Pinellas (jail), I brought the boys downstairs and had a conversation about it,” Johnson said. “I told them, ‘I’m going to jail because I broke the law, I did something wrong.’”

Prosecutors—who recommended Johnson serve 90 days in jail—wrote they might have sought more time behind bars if not for Johnson’s “early and robust cooperation” that “weighed heavily in the government’s determination of its sentencing recommendation.”