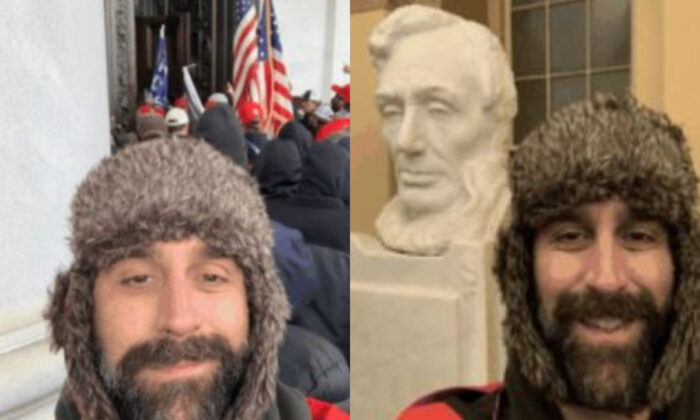 Matthew Mazzocco is seen in selfie photographs outside and inside the U.S. Capitol in Washington on Jan. 6, 2021. (DOJ)
Judiciary

Man Who Breached US Capitol Sentenced to 45 Days in Jail

A man who breached the U.S. Capitol on Jan. 6 was sentenced on Monday to 45 days in jail despite prosecutors recommending he receive no jail time.

U.S. District Judge Tanya Chutkan diverged from the prosecutorial recommendation for Matthew Mazzocco because she felt he only showed remorse when it became clear he could face jail time.

“The country is watching to see what the consequences are for something that has not ever happened in the history of this country before, for actions and crimes that threaten to undermine the rule of law and our democracy,” Chutkan said, according to BuzzFeed.

According to court documents, Mazzocco went inside the Capitol when crowds streamed inside and interrupted a joint session of Congress that was convened to certify electoral votes.

Mazzocco took to Facebook to post pictures outside the building. “The capital is ours!” he wrote in one, according to an FBI affidavit. In video footage later posted on Twitter, an individual later identified as Mazzocco was seen in the building.

Still, the San Antonio, Texas man was not seen committing any violent acts, according to the FBI and prosecutors.

“Mazzocco is seen and heard on the video telling others not to take or destroy anything, and that they were probably going to get in trouble for what they were doing,” the FBI affidavit states.

Mazzocco was charged with knowingly entering or remaining in any restricted building or grounds without lawful authority and violent entry and disorderly conduct on Capitol grounds. He accepted a plea deal in June to plead guilty to the former charge, a class B misdemeanor that carries a maximum sentence of six months in prison.

Prosecutors last month told Chutkan that Mazzocco should receive no jail time. They recommended he be sentenced to three months of home confinement, probation for three years, and at least 60 hours of community service in addition to a $500 charge of restitution.

Mazzocco admonished others not to damage any property and was only inside the Capitol for 12 minutes and there is no evidence he himself engaged in any violence or property destruction, prosecutors said. He also admitted to his actions in a timely manner and does not have a criminal history.

On the other hand, prosecutors disapproved of how Mazzocco “treated the chaos and disorder around him as an entertaining spectacle”; how he made it all the way to the Crypt and the Spouse’s Lounge; and how his “expressions of contrition are belied by text messages sent to family and friends shortly after the event.”

Mazzocco said in text messages in January that he thought there was fraud in the 2020 election.

Most Capitol defendants have received no jail time, though Paul Hodgkins, a Florida man who made it to the Senate chamber, was sentenced to eight months in prison in July and reported there on Sept. 20, his lawyer has confirmed to The Epoch Times.

Mazzocco’s lawyer, Robbie Ward, declined to comment. She argued in court that Mazzocco was remorseful and that his conduct was less severe than many others who breached the Capitol, news outlets reported. Mazzocco apologized for his actions.

Chutkan, though, alleged that the defendant only became remorseful when he realized he could be sentenced to jail, according to the Inner City Press. She also noted that he flew all the way from Texas and entered the Capitol before taking pictures of what happened.

Just because Mazzocco didn’t directly engage in violence does not mean his actions were not serious, she also said before announcing the sentence.