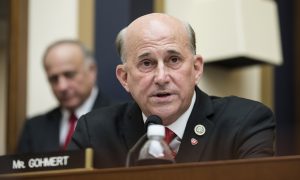 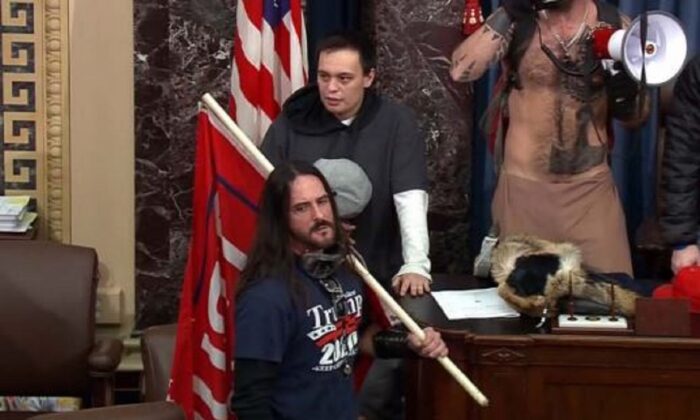 In this image from closed circuit television footage, a man identified as Paul Hodgkins, front, holds a flag while in the Senate chamber inside the U.S. Capitol in Washington on Jan. 6, 2021. (CCTV via FBI)
Crime and Incidents

Man Who Breached Capitol on Jan. 6 Sentenced to 8 Months in Jail

A man who entered the U.S. Capitol on Jan. 6 was sentenced to eight months in jail on July 19.

Paul Hodgkins, 38, of Tampa, Florida, entered the Capitol building on Jan. 6 at approximately 2:50 p.m. He was seen about 10 minutes later wearing a “Trump 2020” shirt and waving a flag with the same message on it, walking among the desks in the Senate well, taking selfie photographs with his cell phone and donning, at one point, white latex gloves.

Hodgkins, who exited the Capitol after about 25 minutes inside, was also sentenced to 24 months of supervised release after serving the jail time and ordered to pay a special assessment of $100 and $2,000 in restitution.

Defense attorneys pushed for no jail time, noting Hodgkins had no prior criminal record and that he wasn’t accused of being violent while in the building.

Patrick Leduc, one defense attorney, asked the judge to be “merciful” and claimed that Hodgkin’s actions weren’t materially different than those of Anna Morgan-Lloyd, 49, who was sentenced to probation last month.

Hodgkins was the first participant in the U.S. Capitol breach to be sentenced for a felony. Morgan-Lloyd pleaded guilty to a misdemeanor.

Hodgkins entered the Capitol bearing ski goggles and rope, indicating that he expected clashes with law enforcement, the judge said.

“I don’t know whether he thought there was going to be an assault on the Capitol or not, but he came that day prepared to defend his position and to engage in whatever needed to be done, even if it placed him at the center of the conflict. … He didn’t end up there by accidental curiosity,” said Moss, an Obama appointee who worked as a government lawyer during the Clinton administration.

“It was obvious as he approached the Capitol that he was participating in an ongoing attack to impede the certification of the election. … To make matters worse, Mr. Hodgkins stood next to the dais of the United States Senate, in the well of the Senate, and raised the red flag that said ‘Trump 2020’ in large white letters. The symbolism of that act is unmistakable. He was making a claim on the floor of the United States Senate, not with an American flag, but with a flag declaring his loyalty to a single individual over the nation. That act captured the threat to democracy that we all witnessed that day.”

Members of Congress and Vice President Mike Pence were evacuated on Jan. 6 after the Capitol was breached through broken windows and other avenues. The evacuees, who were evacuated before Hodgkins entered the chamber, were in the process of certifying electoral votes. They eventually reconvened and certified Democrat Joe Biden as the winner of the 2020 election.

Prosecutors had recommended Hodgkins be sentenced to 18 months in jail, the midpoint of sentencing guidelines as calculated by the U.S. Probation Office.

“Yes, Mr. Hodgkins did not participate in the physical violence or the destruction, but he surely participated in the grave danger to our democracy,” assistant U.S. Attorney Mona Sedky told the judge.

The recommended sentence would help bolster respect for the law, she said, describing the breach of the Capitol on Jan. 6 as being done to “subvert the election and disrupt the peaceful transfer of power.”

“I am truly remorseful and regretful for my actions in Washington, D.C., on Jan. 6, 2021,” he said, noting that he regretted the damage the breach caused and how it “hurt” America.

“Although I know that I did not or would I ever engage in acts of assault, vandalism, or theft, I’ve also thought … that the company of us who remained calmer in our protests may have made others feel emboldened to carry out the destruction that occurred.”

The Florida man said he traveled to the nation’s capital to support then-President Donald Trump and participated in a march that ended at the U.S. Capitol, when he saw people entering the building. He followed and eventually made it to the Senate chamber.

“This was a foolish decision on my part that I take full responsibility for,” he said. “I do not, I will not make any excuse.”

Hodgkins said he acknowledges Biden as the president of the United States. He also said he has voluntarily given up alcohol, completed volunteer hours, and started going to church since being charged. He foresaw that if he were sentenced to jail, he would lose his rental home and his job at an auto shop.

The judge said he appreciated the statement, which he described as “sincere.” He said Hodgkins appeared to try to exert a “calming influence” on fellow breachers.

Leduc told The Epoch Times last month that Hodgkins pleaded guilty because he realized that he had made a mistake and wanted “to accept responsibility” for what he did.

“He understands what he did was wrong. He feels terrible about it,” Leduc said.

He told the court that prosecutors’ attempts to blame his client for the actions of other breachers were flawed. He noted that prosecutors had brought no domestic terrorism charges, undercutting the government’s claims about what happened on Jan. 6.

If the Capitol breach was an example of domestic terrorism, then riots in 2020 that caused widespread damage in Minneapolis, Minnesota, and Portland, Oregon, would be also, he argued.

Moss interjected, indicating how he would soon rule.

“The fact that Congress, chambers of Congress, were emptied during the most solemn act in our democracy, of certifying who the next president will be, by an angry mob of people … that is not an exercise of First Amendment rights by any measure.”