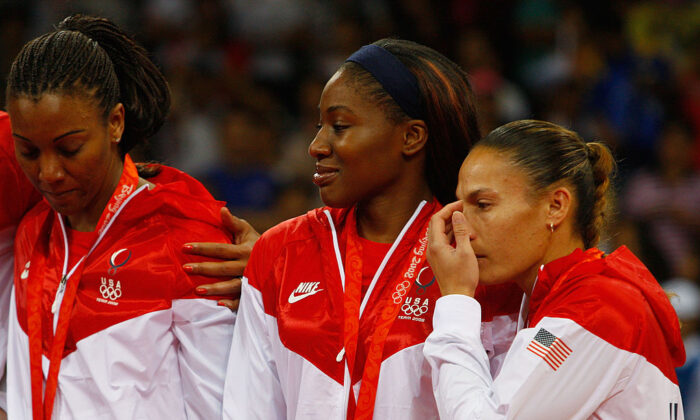 Kim Glass (C) and Robyn Ah Mow-Santos (L) console each other on the podium with their silver medals in Beijing on Aug. 23, 2008. (Cameron Spencer/Getty Images)
Southern California

Man Who Attacked Olympian in Los Angeles Is Known Felon, Was on Parole: District Attorney

The man who allegedly attacked Olympic volleyball player Kim Glass in California over the weekend with a metal pipe has a history of attacking others, prosecutors said on July 12.

“This was a brutal, unprovoked attack. Mr. Tesfamariam has a troubling history of attacking apparently random people with dangerous weapons. His behavior appears to have escalated with time,” Los Angeles County District Attorney George Gascón said in a statement.

Semeon Tesfamariam, 50, was convicted in 2020 of a serious and/or violent felony, according to Gascón’s office.

Tesfamariam also committed at least one other felony assault.

He was sentenced to probation and later received jail time, but was on parole when he attacked Glass on July 8, authorities say.

Video footage shows the man approaching Glass and striking her with the 10-inch pipe. People on the scene detained him until police officers arrived.

Tesfamariam was charged with assault with a deadly weapon. He faces 11 years in prison if convicted.

Prosecutors asked the court to deny bond for the accused, asserting he poses a danger to the public, and the court granted the request.

Contact information for Tesfamariam’s lawyer could not be located.

Glass said in a social media video that she had been eating lunch before exiting a restaurant and bidding farewell to a friend.

“This homeless man ran up. He had something in his hand on the other side of the car in the street,” she said.

“And as I turned to go tell my friend I think something’s like wrong with him, and I think he’s gonna hit the car, before I knew it, a big metal pipe hit me,” she said. “It just happened so fast.”

The attack happened in broad daylight. It caused fractures and other damage.

Glass, 37, is a volleyball player who won a silver medal in the 2008 Olympic Games.

She is also a model.

Gascón, who was sworn into office in late 2020, is set to face a recall over his lenient policies, including a rule against seeking the death penalty, a ban on transferring juvenile defendants to adult court, and prohibitions on filing sentencing enhancements in most cases.

Critics submitted 715,833 signatures this month, well over the number needed to get a recall question on November’s ballot.

County officials have until Aug. 17 to review the signatures.

Gascón has repeatedly defended his policies, saying his stances were well-known during his campaign and his election signified public support of his agenda.

Jamie Joseph contributed to this report.