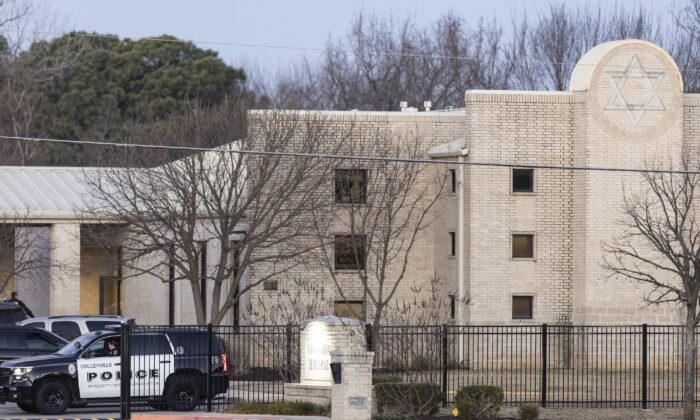 The man who is accused of selling a firearm to the British national who took four hostages at a Texas synagogue earlier in January has been arrested.

Henry Dwight Williams, 32, was taken into custody on Jan. 24 and was ordered held until his next court appearance on Jan. 31, according to court documents.

Authorities say Williams admitted to selling a black semi-automatic handgun to Malik Faisal Akram, who went on to take hostages after being let inside Congregation Beth Israel in Colleyville on Jan. 15.

“Upon being shown photos of Akram, and the handgun seized during the search of the Congregation Beth Israel synagogue, Williams confirmed that Akram was the person to whom Williams sold the handgun,” an arrest warrant states.

Williams said Akram told him when purchasing the gun that it would be used to intimidate somebody who owed him money.

Williams got the gun, which was manufactured in Brazil, and handed it over to Akram in Dallas in exchange for $150, according to investigators citing Williams.

Telephone numbers linked with Williams and Akram suggest they were in close proximity with each other on Jan. 13.

A lawyer representing Williams did not respond to a request for comment.

Williams, a convicted felon, allegedly told authorities he knew he was not allowed to possess a firearm or sell a gun to Akram, who was reportedly probed as a possible terrorist in England.

“Federal firearm laws are designed to keep guns from falling into dangerous hands. As a convicted felon, Mr. Williams was prohibited from carrying, acquiring, or selling firearms. Whether or not he knew of his buyer’s nefarious intent is largely irrelevant—felons cannot have guns, period, and the Justice Department is committed to prosecuting those who do,” Chad Meacham, the U.S. attorney for the Northern District of Texas, said in a statement.

“The Dallas FBI Field Office and our partners have worked around the clock since January 15, 2022 to determine how Malik Faisal Akram acquired the weapon he used to terrorize worshipers at Colleyville’s Congregation Beth Israel synagogue,” added Dallas FBI Special Agent in Charge Matthew DeSarno.

Prosecutors are pushing the court to keep Williams detained until trial, arguing there is a serious risk he will flee or otherwise obstruct justice.

Williams’s lawyer has not yet entered a filing in response.

Akram was killed when federal agents barged into the synagogue. Federal officials have said the incident is being investigated.