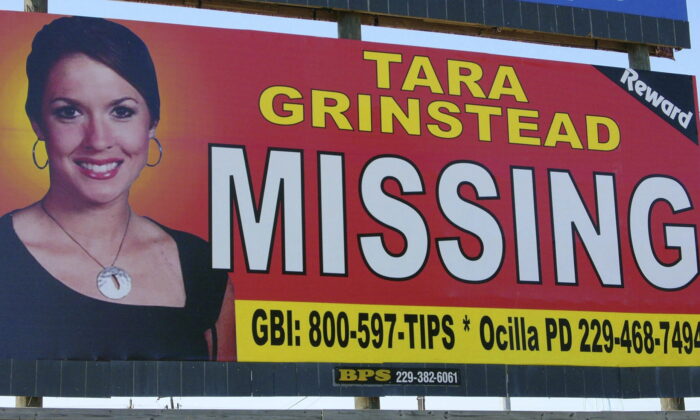 Tara Grinstead is displayed on a billboard in Ocilla, Ga., on March 18, 2019. (Elliott Minor/AP Photo)
US News

Man Who Admitted to Killing Georgia Teacher Acquitted of Murder

In an unexpected turn of events, a man who admitted to investigators that he killed a high school history teacher and burned her body was found not guilty of murder by a jury.

On May 20, Ryan Duke shivered in tears as Judge Bill Reinhardt announced his verdict: the jury found him not guilty of malice murder, felony murder, murder, aggravated assault, and burglary, but guilty of concealing the death of another.

Yet, just about five years ago, Ryan Duke told investigators both verbally and on paper that he not only murdered Tara Grinstead in 2005 but also burned and buried her body afterward.

“I took her life, robbed her of a chance to get married and have children, growing old, and she didn’t deserve that, and there is nothing I can do to change it,” Ryan Duke said, according to a transcript of his 2017 interview with Georgia Bureau of Investigation (GBI) investigators, published by the Atlanta Journal-Constitution.

On Oct. 24, 2005, Tara Grinstead was reported missing after she did not show up to teach. Concerns over her disappearance quickly piled up, and the incident soon became a mystery featured in national news.

In the next few years, GBI received hundreds of tips, conducted hundreds of interviews, and executed multiple search warrants, according to the press release. One of these investigations involved a Georgia man who claimed on YouTube to have killed 19 people—including Grinstead. However, none of these efforts have led to any firm conclusions.

The investigators made their first breakthrough in early 2017 when a tip led them to establish probable cause on Ryan Duke and later to Duke’s arrest. Ryan Duke confessed to GBI’s investigators that he killed Grinstead.

Shortly after his arrest, Ryan Duke led GBI investigators to a pecan orchard in Fitzgerald, where GBI agents found bone fragments confirmed to be Grinstead’s after DNA testing, WMAZ reported. He was charged with murder subsequently.

However, when testifying on the stand in a 9-day trial that started on May 11, Ryan Duke told the court it was Bo Dukes, his then-classmate at Irwin County High School and roommate in the same mobile home, who killed Grinstead.

Bo Dukes was convicted of charges related to attempting to conceal a death, false confession, and helping to move and burn Grinstead’s body in 2019, according to reporting by the AJC. He was sentenced to 25 years in prison in March 2019.

Ryan Duke said on the stand that on Oct. 22, 2005, the night that Grinstead was last seen, he passed out on a sofa after arriving home from the bar. Bo Dukes told him the next morning that Bo Dukes had killed Grinstead, Ryan Dukes testified.

After nine days of sometimes heated exchanges between the prosecution and Ryan Duke’s defense team, the jury believed Ryan Duke.

The court will hold a sentencing hearing on Monday. Ryan Duke will be sentenced to a prison term of 1 to 10 years for his conviction.

“Monday is really about the Grinsteads and letting them … letting them speak, letting them be heard,” said Ashleigh Merchant, a counsel on Ryan Duke’s defense team, during a press conference after the verdict announcement.

“We believe in Ryan,” she said.