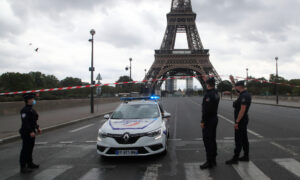 Officials in Texas are searching for a suspect wanted in the slaying of his pregnant girlfriend over the weekend, according to the Houston Police Department.

An 8-year-old boy walked into his apartment in Houston over the weekend and saw his mother, Ashley Garcia, severely beaten. Police said they suspect 23-year-old Alexis Armando Rojas-Mendez is responsible for the death of Garcia, 27. He was charged Sunday with murder but hasn’t been arrested, according to the Houston Chronicle.

Rojas-Mendez allegedly told the boy not to wake his mother and fled the apartment. The child was unable to, officials said, before he asked neighbors to help him.

Firefighters found Garcia with what appeared to be blunt force trauma.

The child identified Rojas-Mendez as his father, court records show, reported the paper. The suspect then told the child that when he returns from work, “they would be going on a trip far away,” according to the child.

Rojas-Mendez’s sister told police that he contacted her at around 4:45 a.m. on Saturday asking for money. She refused, said officials.

Authorities said that they suspect that Rojas-Mendez might attempt to flee the United States, according to the Chronicle.

Garcia’s family told ABC13 that a funeral will be held on Thursday. She leaves behind three children, they said.

Anyone with information on the incident or about Rojas-Mendez’s wherabouts is urged to contact the HPD Homicide Division at 713-308-3600 or Crime Stoppers at 713-222-TIPS.