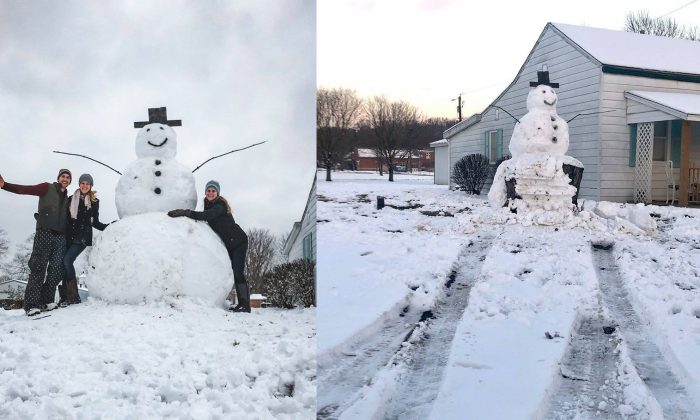 A giant snowman called Frosty has turned into an icon after it survived an attempt by a vandal on Jan 14, 2019. (Courtesy of Codylutzmedia.com)
US News

Man Tries to Vandalize a Giant Snowman, Learns the Best Lesson of His Life

What would you do if you saw a giant snowman? Maybe you would take a few good selfies, appreciate the work that went into making it, share pictures on your social media or call a local TV station. But in this case, the person thought of vandalizing it and karma instantly hit back!

Cody Lutz, his fiance Lucy, and Lucy’s sister decided to build a giant snowman in their front yard after a snowstorm hit in Kentucky.

“We were playing in the snow, she’s from Mississippi so this is the most snow she’s ever seen in her entire life. I’m from Buffalo so this is no big deal,” Lutz told WXIX. “I love the snow!”

To build a 9-foot-tall snowman that would survive for many days, Lutz and Lucy decided to use a large tree stump as the base. They covered the exposed bark with snow and no one knew what was inside, tricking the would-be vandal.

On Jan. 14, when Lutz came back home, he saw tire tracks leading to the giant snowman in his yard. Someone had tried to run over the snowman and had hit the tree stump.

“Instant Karma!” Lutz told WXIX. “It’s hilarious! You know, what goes around comes around, in good ways and bad ways. So, I guess everyone learns a valuable lesson here from Frosty.”

Frosty has become a national icon of good attitude and Lutz has built him a fan page on Facebook. “Guys frosty has a fan page. Show him some respect after his ordeal,” their post said.

Frosty’s fan base is slowly building. “I love his good attitude in spite of the lack of respect from the truck driver that tried to plow him over. Just look at that contagious smile!” said netizen, Vicky Blough Daniels who recommended the page Tree-Stump Frosty on Facebook.

Another fan, Beverly Kelley McGaw thought of Frosty as an anti-vandalism icon.

Lutz and Lucy are planning to build another massive snowman on Jan. 20, and have called it the “Petersburg Snowman Building Party!” The couple have posted a public invitation about it on their Facebook.

The survivor snowman has been making a lot of news globally and Lutz and Lucy have become instant celebrities. Lutz who’s a brand and marketing photographer shared three images of Frosty for the first time on Jan. 16. They were titled, “Stop your audience in their tracks.”