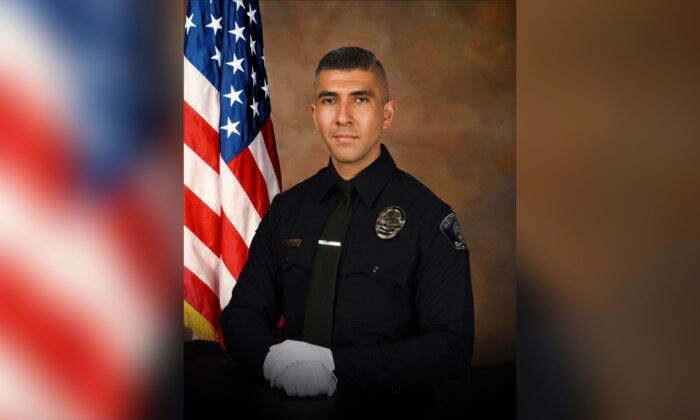 A picture of an off-duty Monterey Park police officer Gardiel Solorio who died in a fatal shooting in Downey, Calif. on Aug. 8, 2022. (Courtesy of City of Monterey Park)
Southern California

LOS ANGELES—A 20-year-old man and a teenager were behind bars Aug. 10 in connection with the fatal shooting of an off-duty Monterey Park police officer during what the district attorney said was an attempted robbery in the parking lot of an LA Fitness gym in Downey.

Carlos Delcid, 20, is expected to be arraigned Wednesday afternoon in Downey on charges of murder, attempted robbery, and being a felon in possession of a firearm. According to jail records, he was arrested around 9:30 p.m. Aug. 8, roughly six hours after the shooting that killed Officer Gardiel Solorio, 26, a rookie officer just weeks out of the academy.

A 17-year-old suspect was also arrested for allegedly acting as the getaway driver, District Attorney George Gascón said during an afternoon news conference. That suspect, who was not identified, is being charged in juvenile court, and the exact charges were not immediately clear.

The murder charge against Delcid includes a special-circumstance allegation of murder during a robbery. Gascón said Delcid will face a maximum sentence of life in prison without the possibility of parole. Gascón has vowed not to seek the death penalty against any defendants.

According to jail records, Delcid is being held in lieu of $2 million bail.

According to the district attorney, Solorio was sitting in his vehicle in the parking lot of the gym in the 12700 block of Lakewood Boulevard around 3:30 p.m. Monday when he was approached by a gun-wielding Delcid, who attempted to rob the off-duty officer.

Gascón said Solorio tried to escape by backing his vehicle away from the suspect, who responded by opening fire “multiple times.”

After the shooting, Delcid allegedly got back into a vehicle driven by the 17-year-old suspect, and the pair fled the scene, Gascón said.

Solorio was found unresponsive in the seat of his car and was pronounced dead at the scene, according to Downey police.

Monterey Park Police Department Chief Kelly Gordon said at a Tuesday afternoon news conference that Solorio, who grew up in Bell Gardens and graduated from Cal State Los Angeles with a degree in criminal justice, joined the department as a recruit in January, and had just graduated from the sheriff’s training academy on July 22 before beginning his field training on July 25.

“Although his time with [the department] was very short, we all knew from the moment we met him that he had the heart of service and was going to be a great officer,” Gordon said.

“And I could tell that from the moment he walked in and did our first introductions in my office. The family and department are grieving right now, and this is an especially difficult tragedy. It’s a senseless act of violence. He was only 26 years old. I don’t know about all of you, but I have children that age. So to me, this is particularly difficult.”

Gordon added that training staff at the sheriff’s academy told her Solorio was “hard-working, dedicated and took every aspect of training seriously,” and that he was family oriented.

“The ‘why’ in the biography he wrote was to be a good role model for his nephews, and he really wanted to make an impact on the community,” Gordon said. “His classmates shared that Officer Solorio had all the characteristics of a great officer—he was humble, dedicated, selfless, and hard-working, but even a better person. He brought laughter and joy to many of us.”

On Wednesday morning, the flag at the Monterey Park Police Department was flying at half-staff and the department had received numerous floral arrangements for the fallen officer.

Solorio is survived by his parents, brothers, sisters, and fiancée.

On a GoFundMe page established to help cover expenses for the family to attend his funeral, Solorio’s sister-in-law, Wanda Marie Lane Solorio, wrote that it was his “lifelong dream” to be a police officer.

“His dream of becoming a police officer after years of hard work and dedication had finally come to fruition when life was abruptly taken away due to a senseless act of violence,” she wrote. “He was taken from his family way too soon. He was and has always been a true American success story.”

She said Solorio was the youngest of 13 children, and the family is hoping to raise money so all of his brothers and sisters can attend his funeral.

As of Wednesday morning, the family had raised more than $10,500.

“[He] was a first-generation college graduate, and the first [of] his family to become police office and brother in law enforcement,” Wanda Marie Lane Solorio wrote.