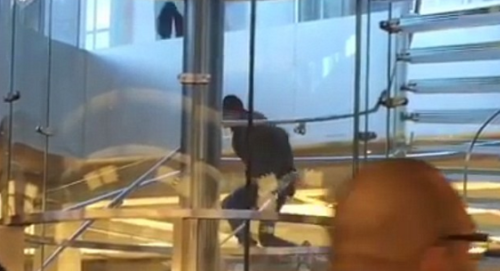 A man caught on tape swinging a samurai sword at the flagship Apple store in Manhattan on November 20 was taken into custody.

The situation unfolded around 4 p.m. at the 59th Street and 5th Avenue Apple store, with its iconic transparent cube structure.

The 30-year-old began swinging the sword around and yelling, bringing some customers to flee outside and others to rush downstairs. He also threatened to kill himself.

Some already outside whipped out phones and cameras to capture the man’s actions.

SCARY! A man was waving a sword and yelling inside the flagship Apple Store on Fifth Avenue in Manhattan. Check out this exclusive video of the tense moments that had people running in fear. DETAILS HERE: http://7ny.tv/1PRsmXt

“He was right on top of me on the glass stairs, so I basically looked up and all I saw was him swinging a sword at people,” witness Lois Apolo told CBS.

Apolo said customers rushed to the emergency exits when the man counted out loud like he had a bomb. “He instead got on his knees and he tried to puncture himself with the sword, and started to count upwards from one till 10,” Apolo said.

But two officers rushed over and tackled him, with more joining in to handcuff him.

The man was taken to Bellevue Hospital after being charged with criminal possession of a weapon and menacing, reported ABC. The 30-year-old’s name has not been released.