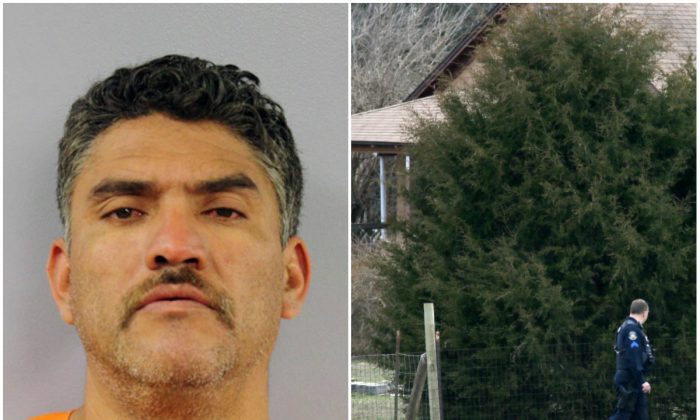 Left: Pablo Serrano-Vitorino. The Mexican national suspected of killing his neighbor and three other men at his neighbor's Kansas home before killing another man about 170 miles away in Missouri was arrested early Wednesday, March 9, 2016, authorities said. (Montgomery County Jail via AP) Right: Police walk near a house where a man was found murdered on Tuesday, March 8, 2016, near New Florence, Mo. (Cristina Fletes/St. Louis Post-Dispatch via AP)
Crime and Incidents

KANSAS CITY, Mo.—A Mexican national suspected of killing his neighbor and three other men at his neighbor’s Kansas home before killing another man about 170 miles away in Missouri was captured early Wednesday, authorities said.

Pablo Antonio Serrano-Vitorino, 40, was captured without resisting shortly before 12:30 a.m. Wednesday following a manhunt. He was found hiding face-down in a ditch about two or three miles from the scene of the last killing, which happened Tuesday morning at a rural home near New Florence, a small community about 70 miles west of St. Louis, said Lt. Paul Reinsch of the Missouri State Highway Patrol.

Serrano-Vitorino, who has been living in Kansas City, Kansas, was caught shortly after someone called the authorities to report that he had fled from an armed man who had approached him, the patrol said.

Serrano Vitorino is in the country illegally, U.S. Immigration and Customs Enforcement said in a statement. He was deported from the U.S. in April 2004 and illegally re-entered the country sometime later. ICE said it would place a detainer on Serrano-Vitorino.

When he was captured, Serrano-Vitorino had an assault-style rifle with him, said John Ham, a regional spokesman for the Bureau of Alcohol, Tobacco, Firearms and Explosives. He said he didn’t know if the gun was used in the attacks, and that agents were trying to determine how he acquired the weapon.

“If he was in the country illegally, and that certainly appears to be the case, it would have been illegal for him to have a firearm under federal law,” Ham said.

Authorities allege that Serrano-Vitorino gunned down his neighbor, 41-year-old Michael Capps, and three other men at Capps’ home late Monday before fleeing, leading to a manhunt. Authorities identified them Wednesday as two local brothers — Austin Harter, 29, and Clint Harter, 27 — and 36-year-old Jeremy Waters, of Miami County, Kansas. Before dying, one of the four managed to call police.

A truck that Serrano-Vitorino was believed to be driving was found abandoned around 7 a.m. Tuesday along the interstate. About 25 minutes later, sheriff’s deputies responded to a shooting about 5 miles away at Nordman’s property. Reinsch said a witness called 911 to report seeing a man running from the property, leading to a search of the thickly-wooded surrounding area.

He was being held Wednesday in a Montgomery County, Missouri, jail on $2 million bond linked to Kansas charges.

Authorities haven’t discussed a motive for any of the killings.

Reinsch has said that investigators weren’t aware of any connection between Serrano-Vitorino and Nordman, whose home is near his family’s campground and a racetrack for remote-controlled cars.

Serrano-Vitorino was charged with battery last summer, according to the Kansas City, Kansas, municipal court clerk’s office. He has also been cited for traffic violations.