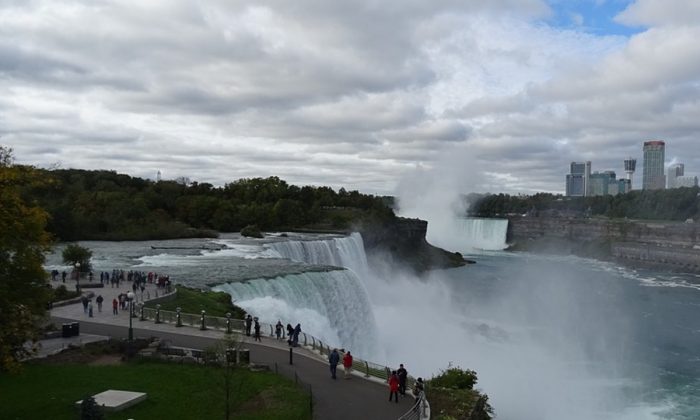 A man fell 167 feet into Niagara Falls, hitting the water on the Canadian side, and surviving with non-life threatening injuries on July 9.

The unidentified man was seen at Horseshoe Falls around 4 a.m. on Tuesday and plunged the hundred-foot height of the fall, reported Fox News.

Niagara Parks Police wrote on Twitter that they had reached out to a man in crisis and saw him climbing over the “retaining wall and swept over falls.”

Police said the man was later found sitting near an observation platform at the base of the falls. He was transported to a hospital for non-fatal injuries.

@NiagParksPolice 0400 responded to male in crisis brink of Horseshoe Falls. On arrival male was observed to climb over retaining wall and swept over falls. Male was found sitting on rocks after search of lower river w/non life threatening injuries. Trans. to hosp. further care

Because of privacy laws, the police have not disclosed the identity of the man and no further information has been released about why he jumped into the falls, reported The Niagara Falls Review.

Police said “it’s pretty rare” for someone to survive after plunging from such a height.

Historically there have been very few people who have survived after falling from Niagara Falls.

Tuesday was the 59th anniversary of Roger Woodward surviving falling over Horseshoe Falls, according to The Niagara Falls Review.

There were three people in the 12-foot aluminum boat at the time of the fall—Roger, his 17-year-old sister, Deanne Woodward, and their family friend and the owner of the boat, James Honeycutt, according to the Desert News.

While the brother and sister survived, Honeycutt died in the accident. “We were just two kids out with a family friend for a day on the water,” Woodward told Desert News on the 50th anniversary of the fall.

“It turned tragic. A man lost his life, and quite literally by the grace of God we were thankful that my sister and I were saved.”

Until 2003 when a Michigan auto parts salesman survived an attempted suicide at the falls, the Woodwards were the only people who had survived an unprotected plunge from the falls.

Woodward said that even today when he hears a similar story he can smell the water of the falls.

“This water looks like it’s as big as a house with the waves and the rocks,” said Woodward. “One minute you’re pulled underwater, you can’t breathe, you wonder if you’re ever going to breathe again. The next second you’re thrown up into the air and you come down and you’re glancing off of rocks as you’re going through the rapids.”

Woodward recalled how he was scared to death and said surviving the fall was a “miracle.”

“I was floating in a cloud,” he said. “I had no sensation of up or down. I didn’t have any sensation in my stomach like you might have on a roller coaster … that moment when your stomach is in your throat.”

The survivor said he believes it was God who saved him that day. “From that day forward I was able to answer that one huge question,” he said, “and the answer to the question was this: God saved me that day, July 9, 1960, because he knew at age 27 that I would come to know him as my savior.”

Another suicidal Canadian man survived the fall in 2009.

According to the Niagara Park website the Canadian Horseshoe Falls down 188 feet into the lower Niagara river, while its crest line is 2,200 feet wide.