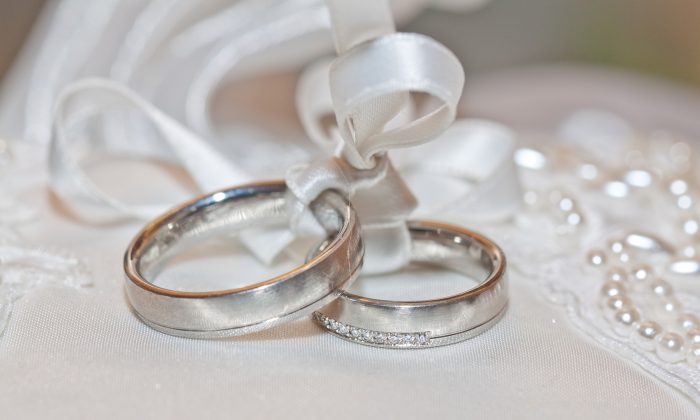 Man Surprises Girlfriend With Proposal and Wedding on The Same Day

A New York man has won over the internet and his girlfriend for his thoughtful and romantic gestures after planning a surprise proposal and wedding in one day to eliminate the stress of wedding planning for his bride.

Danny Rios spent more than five months coming up with a plan to propose and marry his now-wife, Nicole Rios, and even managed to keep it all a secret.

Nicole, who suffers from the chronic condition lupus—which becomes aggravated by stress—was completely unaware of the intense planning.

A little look into the best day I could ever imagine. I still can’t find the words to explain how truly happy I am, but I feel so blessed to have the man of my dreams create a real life fairy tale for us. ❤️ ?: @beneaththestarss ?

“I give women so much credit for all the planning they do for weddings,” Danny told ABC News. “I kind of turned into a ‘bridezilla’ during it.”

Danny first came up with the idea to surprise his girlfriend in August last year. He spent the next few months picking out engagement rings, wedding bands, organizing the venue, and inviting guests. As for the wedding dress, he recruited Nicole’s mother who helped pick out a dress Nicole would like. The pair bought the same dress in two sizes and hemmed it to fit Nicole’s mother, who was the same height as her daughter.

“Nicole kept on saying how she wanted to have people over for an engagement party and then surprise them with a wedding so I knew she was okay with a wedding in the backyard,” he told the news
station. “I know it’s a battle with her illness already and when anything comes up she gets stressed out about it.”

He managed to keep everything a secret by storing everything related to the wedding in a safe and working together with his parents to prepare the couple’s house for the wedding on the day they returned from a spontaneous trip to Disneyland.

“I wrote down what had to be done and I said, ‘I don’t care what anyone says, what’s on this paper is what has to be done. It’s gold,’” Danny said.

On the big day, Danny made sure everything went smoothly for his surprise, which Nicole on her blog.

“Fast forward to that Friday (12/8). Danny was being super crazy about making sure we got to bed early the night before and to the airport on time…aka THREE hours early,” Nicole recalled in a blog post on Dec. 27.

“We were supposed to have dinner plans with my family that night but when we landed at 3:30 I had a text from my mom saying she had a stomach bug and we’d have to reschedule. For a second I hesitated and asked Danny if they were surprising me for dinner and he said no and asked if I wanted Chick Fil A. I never say no to that, so we got some on the way home and ate in the parking lot. Well, if I had any thoughts of a surprise dinner that went out the window then,” she wrote.

When they finally reached home, Nicole was shocked to see their backyard decorated with lights and a tent filled with family and friends. At first, she thought it was a surprise birthday party but received an even bigger shock when Danny got down on one knee and proposed.

“I didn’t think we’d even be getting engaged for at least a year,” Nicole told ABC News. “I was ready to get in my pajamas … I didn’t think this was going to happen.”

Nicole immediately said yes and was greeted by cheers from family and friends. “Everyone came from near and far for my engagement and I felt so so loved. I had to hold my ring hand with my other hand to show people because I was shaking so much!” she recalled in her blog post.

Later that night, Danny asked Nicole to follow him into the couple’s home for a quiet moment together.

“We sat down on our bed and talked for a bit, and then Danny said if we wanted to, we could get married that night and go to bed with me as his wife,” she wrote. “My jaw dropped.”

“He told me to turn around and I saw a dress and tux hanging up. I just kept saying yes!” she added. “How could I ever say no to that?!”

In less than two hours after getting engaged, the couple became husband and wife in a ceremony officiated by Danny’s father.

“It was exactly what I would have wanted,” Nicole told ABC News. “I really couldn’t have imagined a more perfect way to marry him.”

Nicole said she was extremely grateful for her husband’s empathy and thoughtfulness in planning the wedding by himself with a few family members.

“The fact that this incredible man planned EVERYTHING for me so I didn’t have to go through wedding planning stress is indescribable.” she wrote in her blog.

The couple told ABC News that they hope the attention of the wedding would bring more awareness to lupus as well.

“We want anyone who has it to know that if you have lupus, it’s a crummy disease but you can still find happiness,” Danny said. “It’s out there. Don’t stop looking.”

Rather than asking if anyone objects, our amazing Minister Jan asked those who approved of our marriage to simply applaud. ? From the very bottom of my heart, I want to thank everyone who reached out and who shared this most perfect day with us. To everyone who came from near and far, and from every corner of the country simply thinking they were coming to an engagement party…I am so grateful for you and to have you in my life. I can’t in my wildest dreams imagine a more perfect way to celebrate spending the rest of my life with my soul mate than closely surrounded by family and friends. I love you all…unconditionally…and thank you all for making this the best surprise and day of my life. ・・・ #Repost @ncar48 (@get_repost) ・・・