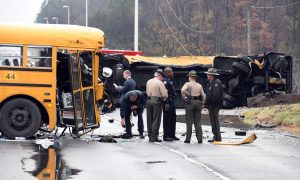 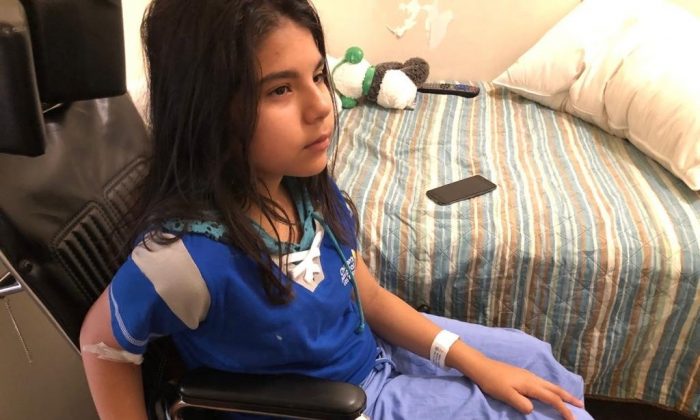 13-year-old Natalia Rodriguez speaks about a hit-and-run crash that left her with a broken leg on Sept. 6, 2019. (Courtesy of LAPD via KTLA)
Crime and Incidents

A man hit a 13-year-old girl twice with his Jeep as she was walking to school in Los Angeles on Sept. 6. But instead of helping her, he said sorry then fled the scene. Police are seeking help in locating the culprit.

The Los Angeles Police Department (LAPD) said Natalia Rodriguez was walking to school in the Pico-Union area on Friday morning when a man who was heading north in a gray Jeep Grand Cherokee struck her at about 6:30 a.m., reported KTLA.

The man allegedly hit the girl twice while she was crossing the road at a marked crosswalk at Pico Boulevard and Alvarado Street.

“He actually stopped, went in reverse, and then came back and struck her a second time,” LAPD Detective Moses Castillo told KTLA.

“He got out of his vehicle, approached her and told her, ‘Hey, I’m sorry,’ but then got back in his car and took off,” said Castillo.

The victim was later helped by another man and his son who called the police.

The police describe the alleged culprit as a black man in his early 30s. He is 6 feet, 2 inches tall, has black hair and brown eyes, and weighs about 270 pounds. His license plate was from another, unknown state, according to the police.

Every year in the United States at least 100 children die and about 25,000 get injured while walking to or from school, according to Timothy J Ryan and Associates.

About half of these deaths that happen due to collision involve children who are 15 years or older. The law firm says that school children are getting increasingly distracted by the electronic devices they own and they keep surfing the internet for various purposes while walking, making them more prone to accidents.

“When they focus on screens, they don’t always look at the road before they enter a crossing,” the company said in a post on its website.

With lots of kids walking to and from school remember to be cautious driving during school times. Review with your children the safety rules and to always be cognizant of their surroundings when walking. The more we know the safer everyone will be! @NHTSAgov #DriveSafe #Walksafe https://t.co/VewDXWgqRa

How to Keep Children Safe on Roads?