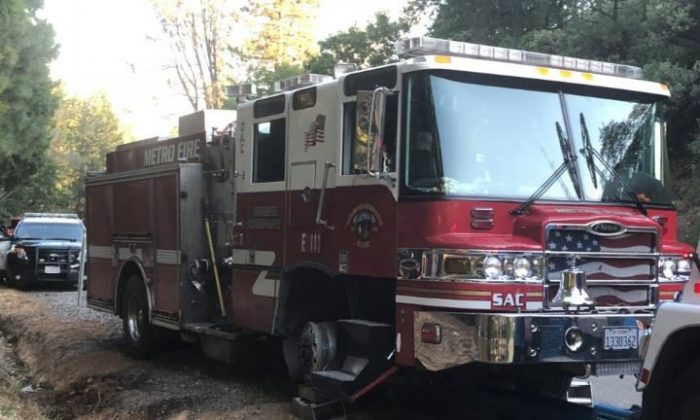 (Metro Fire of Sacramento)
US News

A man stole a fire engine valued at about $1 million in California on Saturday before leading police officers on a chase that lasted several hours and went through multiple towns.

The unidentified man drove the truck through Sacramento County and three other counties for nearly 100 miles, often swerving into oncoming traffic, reported KCRA.

The theft occurred as firefighters battled a nearby fire.

“I think most of us are shocked right now,” said Sacramento Metro Fire Capt. Chris Vestal.

Officials said the man took turns driving with a woman, both of whom were arrested.

The chase finally ended after one of five spike strips deployed by officers pulled a tire off the truck.

“The door was wide open, we thought, ‘Hollywood,’ just (expletive),” said the unidentified male suspect after he was detained. “All right, here you go, we’re going to drive, take off,”

A Type 1 #FireEngine was stolen from the scene of a #VegetationFire today in #RioLinda. During the pursuit by various #LawEnforcement agencies #MetroFire deployed a reserve engine in the stolen apparatus’ place to continue our essential mission of #EmergencyService delivery. pic.twitter.com/NGvSovzBcX

The man actually picked up the woman after he stole the truck, according to a California Highway Patrol officer.

“We found out that we actually had a task force officer that was there when the fire truck got stolen and watched it drive down about a mile and the driver, the male, honked the horn twice in front of a house. A female ran out of the house and jumped into the passenger seat of the fire truck. So, he picked her up,” the officer told Fox.

Officials said they had tested the suspects for drugs or alcohol.

“All of those indications are there,” an official said.

The suspects were charged with multiple felonies.

“Our #1 priority is the safety of our community and in this case, that of affected communities through which the pursuit took place,” said Metro Fire of Sacramento via Twitter. “We are relieved no one was injured, including any of our personnel from #MetroFire and all other responding allied agencies.”