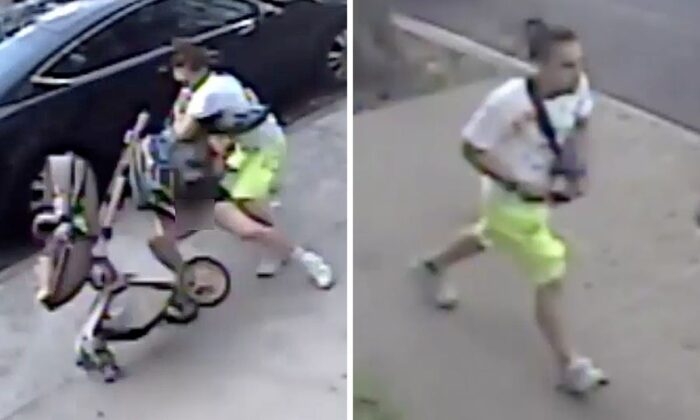 A 25-year-old man allegedly stabbed his ex-girlfriend several times on a Bronx street near their child, whose stroller tipped over in the attack.

The infant escaped unharmed, and the 21-year-old mother is expected to survive the attack, officials told the New York Daily News.

The mother and her baby were hospitalized, officials told WABC.

Police say the woman was walking with her child in the stroller while speaking with her ex-boyfriend, identified as Carlos Gonzalez. He then suddenly became enraged because she didn’t listen to his demand at around 7 p.m. on Tuesday, officials said.

The video, uploaded here, allegedly shows Gonzalez, 25, choking and stabbing her several times before dragging the two down and running away.

Officials said that Gonzalez, who lives in Manhattan, is around 5 feet 10 and weighs 140 pounds with brown eyes, a thin build and long black hair in braids. He was last seen wearing a white T-shirt, yellow shorts, white sneakers, and carrying a black bag.

Gonzalez is still at large.

The child and the woman, who were both not identified, are expected to survive, officials told the ABC affiliate.

The video (WARNING: Graphic) can be viewed here:

🚨WANTED for ASSAULT: Have you seen Carlos Gonzalez? On 7/14/20 at approx 7:11 PM, in front of 3343 Sedgwick Ave in the Bronx, he placed the female victim in a choke hold, dragged her to the ground, then stabbed the victim multiple times. Any info call @NYPDTips at 800-577-TIPS. pic.twitter.com/Hj6P3TJMFa

Anyone with information about the assault can call the NYPD’s Crime Stoppers Hotline at 1-800-577-TIPS (8477).