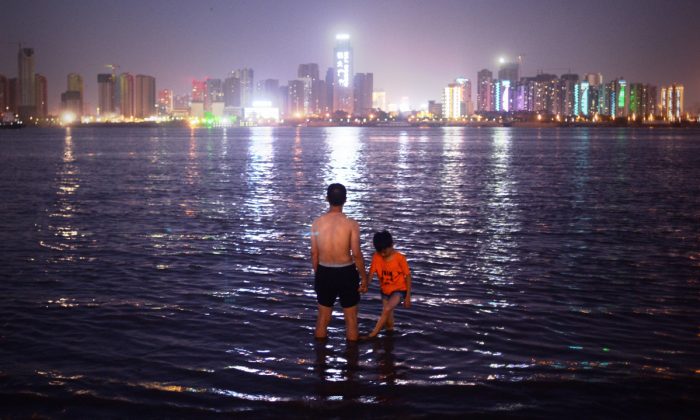 A man and his son standing in the Yangtze River in Wuhan. (Wang Zhao/AFP/Getty Images)
Social Issues

While most people drive their car or take public transportation to get to work, one man in China decided to take a road, or river, less traveled.

For the past 11 years of his working life, Zhu Biwu, 53, a man living in central China, commuted to work by swimming from shore to shore across the Yangtze River, according to the Chinese media report “One Day, One Life” on May 7. Up until October 2018, Zhu would make his journey to his all-too appropriate position as a life guard at a city pool.

Zhu took up this mode of transportation to avoid regular commuter traffic, and had already swam for some time before making his first attempt at crossing.

The Yangtze River, also known as the Chang Jiang, which means “long river” in Chinese, is the third longest in the world. It starts in the western Tibetan plateau, and travels eastward to Shanghai and the Pacific Ocean.

Several provinces are supplied with water by the Yangtze, including Zhu’s home in Hubei. In the city of Wuhan, where Zhu made his daily crossing, the Yangtze is over 4,300 feet (1,300 meters) wide, close to a mile long.

The watery commute would take Zhu about 30 minutes to complete each way. Every morning, except for the cold days of winter or those with unfavorable fog, Zhu would be at the southern shore of the Yangtze with an inflatable orange bag, ready to brave the currents.

The bag contains his work clothes and personal items, like a cellphone and a watch. It also doubles as a beacon, warning the cargo ships of his presence in the river.

Zhu would watch the river for ship traffic just as one would watch for vehicle traffic on the road. However, Zhu told “One Day, One Life” that the captains became familiar with him, and so there was little danger from ships passing by.

Other than the massive ships, Zhu also said the strong undercurrent of the Yangtze was another concern for swimmers. To compensate for the current, Zhu swims upstream while crossing the river, and follows along a large bridge, called the “Parrot Island” bridge, to act as a guide for where he was going.

He made his first crossing of the river with a group of swimming enthusiasts in 2008, but had already taken up swimming before that.

In 1999, Zhu was diagnosed with type 2 Diabetes, reportedly since he spent many of his evenings staying up late playing cards and drinking. By 2003, his workplace, a food market, had to lay off many employees; Zhu’s workload dropped to three half-days a week. With his extra time off, he began pursing healthier lifestyle options, according to “One Day, One Life.”

By 2006, he had found work as a life guard, two years before his first river crossing. However, the workplace was on the northern side of the Yangtze, while his house is on the southern side. After his first crossing in 2008, he decided to take up this form of travel to save time over the regular commute.

This then continued for 11 years until October 2018 when the athletics centers at which he worked was closed down. Not long after, Zhu found work at another pool. However, this time his work is on the same side of the shore as his home.